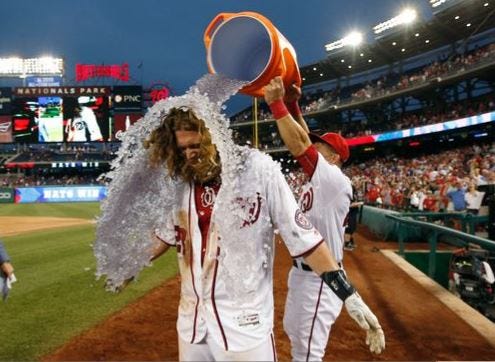 The Nationals’ 2nd series against the Cubs this season went a lot better than the first. Unlike the trio of games at Wrigley in early May, the Nationals actually won games in this series. Game one consisted of a very dominant Scherzer who K’d 11 and carried a perfect game into the 6th inning. The 2nd game was neck and neck until Sammy Solis served up an RBI double to Albert Almora in the top of the 9th, and in the finale the Nats won an instant classic in the 12th inning yesterday afternoon. Before I delve into the details of yesterday’s game, I want to look at the series as a whole and what it means going forward.

The Cubs are the best team in baseball and if you don’t believe in curses are the favorites to win the World Series and end their 107 year drought, but this three game stretch showed me that the Nationals can hang. Washington has the 2nd best record in baseball and just became the first team in nearly a month to win a series against the Cubs. Max Scherzer, Gio Gonzalez, and Stephen Strasburg demonstrated to the world that they can quell Kris Bryant, Anthony Rizzo, and the Cubs. 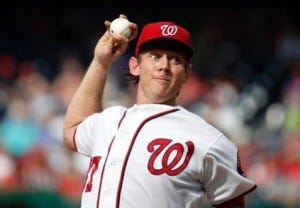 The bench has been great, the rotation has been great, Ben Revere has been hitting much better lately, Trea Turner will be a welcome addition to the lineup but Espinosa has been smoking hot recently, and the rest of the lineup (with the notable exception of Ryan Zimmerman) has produced. The team might consider adding a first baseman to either supplement or replace Ryan Zimmerman and maybe another reliever in case Jonathan Papelbon’s injury lingers (and just because you can never have too much bullpen help) but aside from these two additions, we’ve got ourselves a pretty well constructed roster without many major holes. We are looking way too far ahead but the Nationals certainly stand a chance against the Cubs in a potential playoff showdown.

Yesterday’s game had all the fixings of  a pitcher’s dual with both starting pitchers holding the offenses scoreless through 7 innings. Stephen Drew of all people came through with an enormous tie-breaking, pinch-hit solo shot in the bottom of the 8th and I’ve constantly given Drew shit and I will continue giving him shit – that just isn’t going to change – but we should recognize what he’s been doing for the past few weeks. Drew now has 4 homers (and 8 hits) in his past 14 at bats. Drew annoys me and he really was terrible in April and most of May but I have to give credit where credit is due and he has been mashing it recently. Matt Belisle and Olly Perez ultimately blew the save situation but Bryce Harper, Daniel Murphy, and Wilson Ramos came through like they have so many times in the past to tie the game back up at 2.

The Cubs took a one run lead in the 12th and Anthony Rendon was ejected in the bottom half of that frame after checking his swing on a ball outside the zone that was called a strike. After Rendon’s tossing, the Nats struck with some smallball which they have gotten so good at in the past few weeks. Danny Espinosa was squarely hit by the pitch, stole 2nd, scored on a Michael A Taylor single to even the game then a deep hit by Jayson Werth finally ended the 4:17 affair. He then told all his detractors to kiss his ass, which was well deserved by him.

This Nats team has the 2nd best record in baseball and just proved that they can hang with the Cubs. We’ve got a lot of work to do and nearly 100 games left in the season but you’ve got to be encouraged by this past series and by the Nats’ production as a whole.