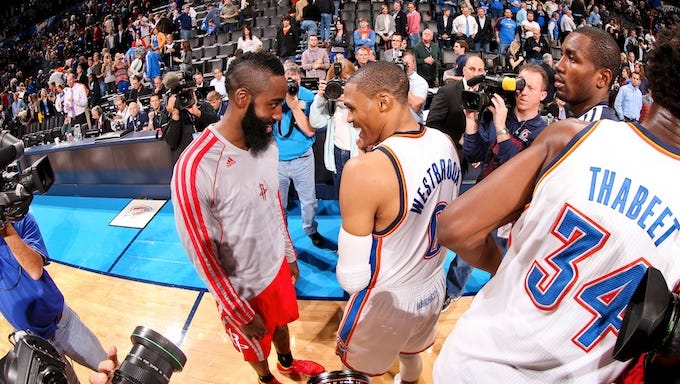 The blows continue for the US Olympics basketball team. Now, we’ll still be the favorite to win the gold medal and still the best basketball country in the world, but a lot of big names are starting to pull out of the Olympics for various reasons.

Most recently James Harden and Russell Westbrook announced they’d be staying home. Harden’s reason is because he felt like he didn’t have a strong season and wants to stay in Houston to work on his game with teammates – which I like to think is them just sitting around mocking Dwight Howard and figuring out how to not play defense under D’Antoni.

Westbrook hasn’t given a reason as to why he is missing the games, but many people believe it’s because he just got married and wants a breather. Hey Big Cat and PFT, can we get a ruling on this one?

What happens now though will be interesting. The point guard spot is the deepest position for the US as they planned on having Steph, Russ and Kyrie as your three point guards, but now with no Steph, Russ and John Wall it’s thin. Jerry Colangelo hasn’t ruled out adding another point guard – which means I’m still alive and not afraid of the Zika Virus – the question is who will be that be.

Right now I would guess the team looks like this:

I’d be surprised if Team USA adds a point guard to the roster as you can always have LeBron be your third point guard. It wouldn’t shock me if he adds another point guard to camp in Vegas to see if someone sticks out. With Conley being hurt, I could see him passing on the Olympics. If someone was to get the invite, I’d expect it to be Kyle Lowry, especially with Colangelo’s ties to Toronto.