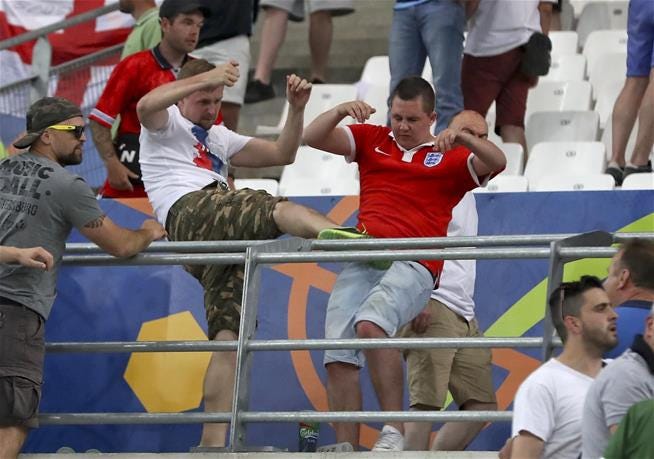 It’s no secret that the Euro 2016 tournament is out of fucking control right now. Feits posted yesterday about how everyone is beating the shit out of each other. There have been more clashes between fans and police earlier today. The Russian team is on the verge of getting kicked out of the tournament because of their fans’ behavior. Same goes for England. And I guess there’s really only one question to be asked at this point; who in the actual fuck allowed all these Philly fans to go to France pretending to be English and Russian soccer hooligans?

Soccer is a beautiful game. Its fans are beautiful people. And quite frankly, it’s sickening what Philly fans have done to the game. It’s just a game. It’s a group of grown men playing a children’s sport. I think it’s safe to assume the majority of the civilized world understands this. But not the heathens hailing from Philadelphia, Pennsylvania. They take this beautiful game and turn it into chaos. They use it as an opportunity to start fights, to antagonize opposing fans, to act with with a complete and total lack of class and regard for humanity. We’ve seen them throw snowballs at Santa Clause before over sport. We’ve seen them throw batteries at opposing players before over sport. And now they’re starting riots in France over sport. I’d say “Stay classy, Philadelphia” but I know they won’t listen. For shame.

Sidenote: the 2018 World Cup will be in Russia. Now I don’t know a ton about Russia but from the little that I do know, it seems to be a lawless wasteland. So I think that coinciding with the 2018 World Cup should be a World Cup of Hooligans. Just allow chaos and anarchy in the streets. Let these fanatics go after it with each other and the last country still standing gets the win. There’s about a billion ways to die in Russia. I think that going out in a hooligan death match might be one of the better options.

Sidenote 2.0: was really hoping this video was from a real account and from today. Turns out it was just some other riot in 2014 between some crazy fans in Turkey. Still worth the watch though.