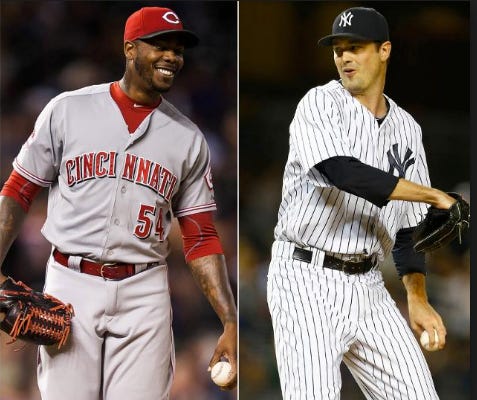 NJ.Com -Now this is a fun rumor.

As the Yankees try to pick themselves up after three losses in a row (including an ugly high-scoring affair in Colorado on Tuesday night), trade rumor season has arrived. The MLB Draft is in the books, meaning front offices can focus on the stretch drive for 2016.

In Chicago, the Cubs are focused on just one thing: Winning a World Series in October and breaking a drought that has been going on since before World War I began.

Enter the Yankees, potentially as sellers, and a bullpen that has multiple intriguing pieces for the Cubs to scout. While the idea of Chicago landing one of Andrew Miller, Aroldis Chapman or Dellin Betances was logical, the latest report on the Cubs interest in Yankees reliever is downright scary—at least for the other National League contenders.

According to Phil Rogers of MLB.com, the rumors aren’t just true; they’ve been understated. Chicago doesn’t just want one of the Yankees arms. They want Chapman and Miller, per Rogers’ story:

Yes, Miller and Chapman in the same deal. I’d guarantee you that the Cubs will at least explore that, assuming the Yankees get to the point where they are willing to make them available.

Rogers goes on to explain the desperation from Cubs ownership, Theo Epstein’s history with Miller and how the club could sure up it’s only weakness by adding two impact players.

Now that the draft is behind us, look for trade talks to heat up. As much as I pull for the Yankees, they are burning games without advancing in the standings so they are going to have to start seriously considering moves. Just Friday they looked like a team poised to finally make a run and play up to the level that they should’ve all season, but after 4 losses in a row and with the phone ringing, it’s time to at least start listening to what teams are offering.

If this team continues to slip against bad teams like the Rockies, they’re a bad team and it’s time to sell. The next 2 weeks decide the rest of the season because if we come out of these 4 series in a row against other sub .500 teams without making a significant jump in the standings, it’s not going to happen when we get into the tougher parts of the schedule. I said a few weeks ago that it was time to sell Beltran before he got injured and now he’s missing time for a knee injury. Without him we’re in last place but if we hold onto him much longer we could be watching him finish out the season being unproductive or even on the DL with the team getting nothing in return.

As for who we can get back for Chapman and Miller, there really can’t be much of a limit. Essentially the Yankees would be handing the Cubs their first world series in 108 years and that has to have more value than any player, as long as that player doesn’t jeopardize their chance at coming out on top. Soler is an interesting player with great upside if he can stay healthy. Another big benefit its that he is under contract through 2020 for under $5mil a year so if he doesn’t develop into the next Cespedes, it’s easy to cut ties without impacting the free agent push in 2019. Kyle Schwarber is an interesting possibility but everything we’re hearing from the Cubs is that he is off limits but with 2 premier closers in the mix and the Nationals showing interest as well, Schwarber may just end up in play.

Either way we’ll know which direction this team is going by June 27th. With the first place Rangers coming to town on that day, if the Yankees are still hovering at .500, there will be a bullpen tag sale going on at 161st and River.