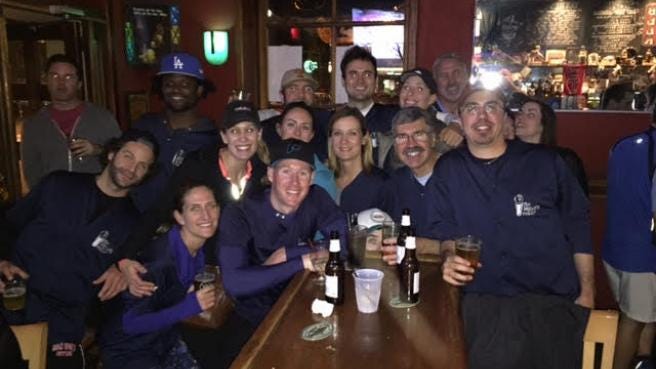 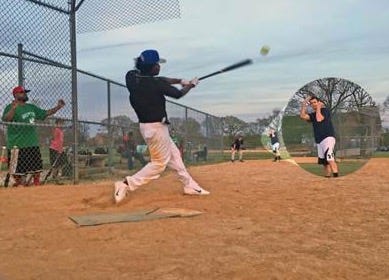 CB – Dick Mahoney was a friend of a friend, who was “sending vague emails on [the Bishop’s Collar softball team] softball thread about how he’s bringing some kid named ‘Mahoney’ onto the team, that Mahoney is one of the best softball players he’s ever seen, and that we should all be excited about Mahoney.”

The author expected any ol’ Delco dude, but instead got Dick Mahoney, who “looked like Eazy-E circa 1988: black dude with a Jheri curl hairstyle, LA Dodgers shirt and hat.” In his first two games, the story goes, Mahoney hit seven home runs (and it would’ve been eight if he hadn’t overrun the lead runner on the base path). A real-life Steve Nebraska, if you will.

Other than crushing the ball and keeping his team in first place, Mahoney didn’t really socialize much. The email says that he once told a teammate that he did “a little bit of this, a little bit of that” for a living. Rumors started to spread:

The woman who organizes our softball team asked [redacted] what Mahoney’s email was so he could be added to our thread. “Doesn’t have one,” [redacted] said. When [redacted] witnessed Mahoney park his Porsche Cayenne next to the field, he sort of put [redacted] on the spot about Mahoney’s background, [Redacted] just said, “You’re going to have to find out for yourself what Mahoney does for a living. I can’t tell you.” Conspiracy theories started to spread that Mahoney was a drug dealer or was in porn (he missed a few games because he was flying back and forth from LA, apparently.) The author then reveals that he was told Dick Mahoney was leaving the team because he was moving back to LA, to pursue a filmmaking career. Also, that he’s Walter Thurmond III.

But I do have some issues with Dick Mahoney’s style. I don’t care who you are, if you roll into a coed softball game in full baseball pants and batting gloves you are a Hardo with a capital H. Those cats are usually the guys who take sports with women WAY too seriously. They roll up to coed softball games in a full uniform, sports batting gloves, do a warm-up ritual on the on-deck circle (probably with a donut), and usually still bat around the Mendoza line in slow pitch. Walter Thurmound/Dick Mahoney is too much of a man to be associated with “That Guy”. For the most part That Guy is not only is he a menace to the laid back sport of slow pitch softball, but he is God awful at the game, too. The type of hardo who played JV in high school and has to take out his shitty life on the ump after he gets called out by a clear two steps at first. “No way!!! You gotta be fucking kidding me!!!” Relax, man. And here is a prime example of a “That Guy” Dick Mahoney is associating himself with wearing full softball gear.

Unreal rage. Slow pitch softball should never be taken this seriously. The should be won, but played for enjoyment, comradery, and, above all, the booze.