Tech Insider- You’ll finally be able to delete those unwanted iPhone apps from Apple when you get iOS 10 later this year. Yes, that means you won’t need a junk folders of apps you never use. Goodbye, Compass. The news was first revealed when the Stocks app, Mail app, and several other Apple apps become listed in the App Store on Monday. Many of the apps listed, such as Tips and Voice Memos, come preinstalled on every iPhone and have previously not been deletable.

Oh fuck yes. I feel like the scene in Office Space where they take the copier out back and just beat the living shit out of it. Sure these apps didn’t actively ruin my life like that copier did. But they played the long con. Just sitting in my Apps Elephant Graveyard folder, pissing me off every time I saw them whenever I made it to the third screen of my phone. Especially the Stocks app. I know I am too dumb to play the stock market and don’t do nearly a good enough job managing my personal finances. I don’t need an app on a phone that I paid for reminding me how childish I am with my portfolio (or lack thereof).

In fact, I may do what Jon Snow did to Olly and Alliser Throne and publicly execute Stocks and that shitty Weather app on principle alone, followed by an iBooks burning and walk of shame for that stupid iWatch app. Hell, I may even delete Facetime just to make a point. I have been Team Anti-Facetime forever. I am barely Facetime presentable when I am in public, let alone the privacy of my own home. Hanging Facetime in the public square along with the other losers of the Island of Misfit Apps is going to be soooo therapeutic. 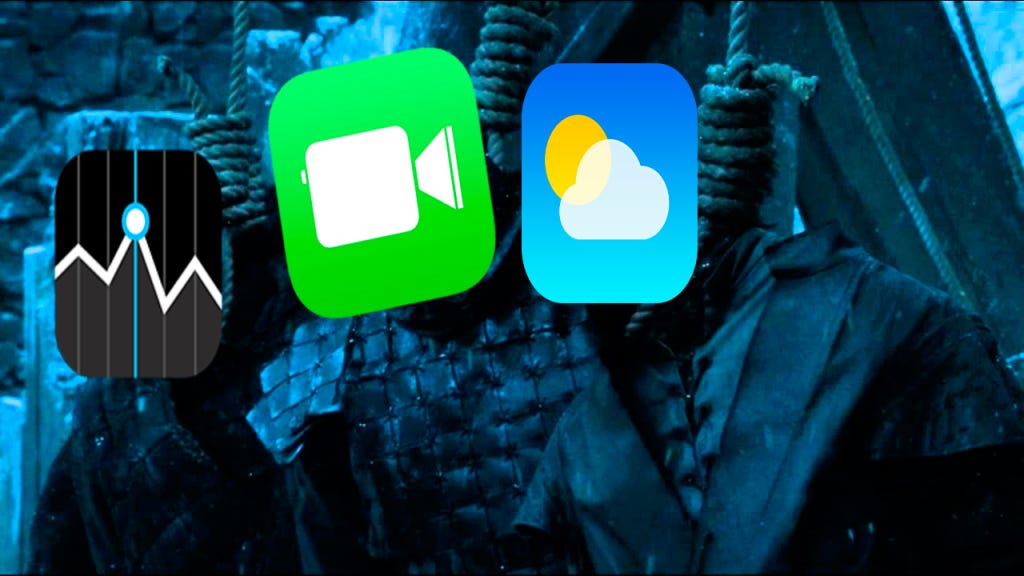 However, the one app that I will keep that will most likely be deleted by 99% of the world is the Compass app. There is no easier way to avoid looking like an idiot that can’t figure out which way is which when leaving the subway than the Compass out. Severely underrated for idiots like me.

I was also absolutely thrilled to read that the worthless ass Game Center app is taking a hike. In the words of my good friend TJ Lavin, don’t take care, hope to see you never! And I heard a rumor that you will be able to Mutombo someone if they try to turn on Read Receipts for your texts, which is clutch like Jordan in the 4th. Read Receipt people are literally the worst humans on the Earth and should be shunned to oblivion like most of these shitty apps have for years. It’s nice to see Apple is finally getting its shit back together despite those vicious, awful rumors of them taking away our headphone jack on the next iPhone.