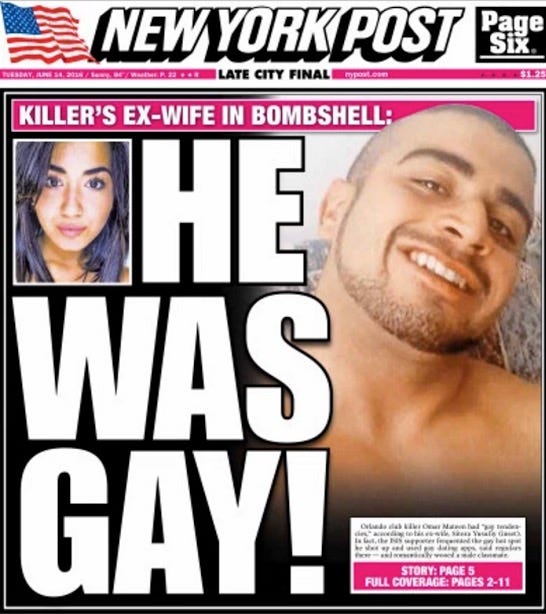 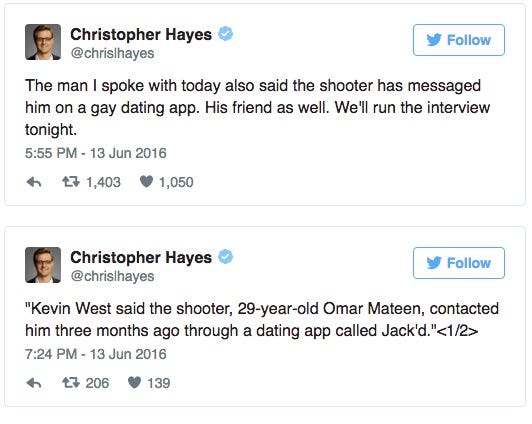 NY Post – The ex-wife of Orlando mass killer Omar Mateen claimed Monday that she believed he was homosexual.

Sitora Yusufiy, who was married to Mateen in 2009 for three months, made the shocking claim on Brazilian television station SBT Brazil.

Her fiancé, Marco Dias, speaking in Portuguese on her behalf, said that Yusufiy believed that Mateen had “gay tendencies” and that his father had called him gay in front of her.

The bombshell came as a male former classmate of Omar Mateen said he had been asked out romantically by the mass killer, who reportedly was a virtual regular at the Pulse nightclub, having visited it more than a dozen times over the years.

The former classmate said he would hang out with Mateen, hitting gay bars after attending class at Indian River Community College police academy in 2006 — and one time Mateen asked him out “romantically,” according to the Palm Beach Post.

“We went to a few gay bars with him, and I was not out at the time, so I declined his offer,” the former classmate told the paper.

The classmate told the paper he thought the killer, who pledged allegiance to ISIS before killing 49 at the Pulse gay nightclub, was gay and in the closet.

One Orlando man, who refused to be named, told MSNBC that he had seen photos of Mateen on several gay dating apps, including Grindr, Adam4Adam, and Jack’d. He claimed that at least two of the man’s friends had been contacted by Mateen on the apps in the past.

“He was very creepy in his messages, and I blocked him immediately,” the man said.

A drag-dancing married couple described seeing Mateen as many as a dozen times at the gay-friendly nightclub where he’d later embark on the single worst gun massacre in modern American history.

Ty Smith and Chris Callen recalled the eventual killer being escorted drunk from the Pulse bar on multiple occasions, including one incident where he pointed a knife at a friend.

Both professed shock at seeing his face on TV: “It’s the same guy,” said Callen, who performs under the name Kristina McLaughlin. “He’s been going to this bar for at least three years.”

Smith said the sometimes-visitor would show up with a buddy and let loose in a way he couldn’t when he was closer to the family home in Port St. Lucie: “(He’d get) really, really drunk… He couldn’t drink when he was at home — around his wife, or family. His father was really strict… He used to bitch about it.”

LA Times – Kevin West, a regular at Pulse nightclub, said Omar Mateen messaged him on and off for a year before the shooting using the gay chat and dating app Jack’d.

But they never met – until early Sunday morning.

West was dropping off a friend at the club when he noticed Mateen – whom he knew by sight but not by name – crossing the street wearing a dark cap and carrying a black cellphone about 1 a.m., an hour before the shooting.

As soon as West saw photos released of Mateen after the shooting, he said, he drove to his local police station, where officers summoned FBI officials, who showed him a photo of Mateen on a computer screen.

“I said, ‘That’s him,’” West said, and turned over his phone and Jack’d log-in information to the FBI, which still had the phone late Monday, he said.

Listen the most important thing right now in the wake of the tragedy in Orlando is that there are hundreds of vigils around the country and an outpouring of support for the LGBT community and that people from all over are donating money for victims’ families. That’s #1. But if you’re a spiteful person (like me) who thinks this coward scumbag got an easy way out with a quick bullet to the brain, you can’t help but love waking up to this new development this morning. That every headline across the country is talking about how the terrorist was gay. How the world’s #1 piece of shit homophobe was on gay dating apps messaging big burly gay guys about having gay sex. How every major publication has a story above the fold saying he spent all his free time trolling for dick in a gay club.

Obviously it won’t bring any of his victims back, and like I said, it’s just a small thing to take solace in for the angry grudge-holders like me. But I hope this piece of garbage is getting phone notifications in Hell every time he sees a new story with a big bold headline declaring him gay AF goes up. Hey you wanted attention right? Here you go. Thought you were striking a dagger in the heart of the people you claimed to hate so much, instead they’re coming back stronger than ever… and also now you’re gay.

Reminder – every single penny raised from our Together shirts goes straight to the families of the Orlando victims. 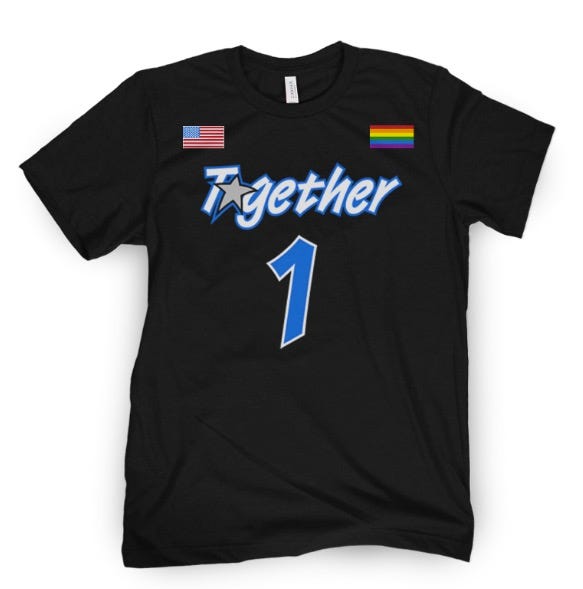