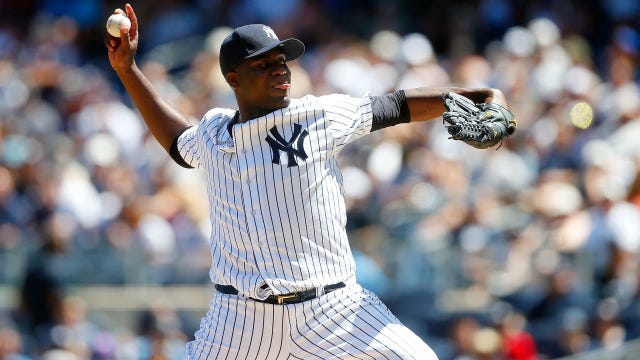 NEW YORK (CBSNewYork/AP) — A loss, and then a long flight to Denver. After a tough weekend to close out a rugged stretch, the New York Yankees were actually looking forward to getting on the plane.

“It’s good. A day to rest, just to relax and get it going the next day. It’s been a while,” outfielder Carlos Beltran said.

The Yankees finished up playing 40 games in 41 days when they were shut down by rookie Michael Fulmer and the Detroit Tigers 4-1 Sunday. They’re off Monday before playing two games against Colorado at Coors Field.

New York went 23-17 during its grind, which included a one-game trip to Detroit for a rainout makeup.

Detroit took two of three, winning a series in the Bronx for the first time since 2008 at the old Yankee Stadium. A day after Justin Verlander was in control, Fulmer excelled.

It was great to have the Yankees back above .500 on Friday but what we learned over the rest of the weekend is that there’s still some work to do. We ran into 2 pitchers that threw the ball well against what had been a hot lineup and with Fulmer on a 28.1 scoreless inning streak, bats are going to cool down. The one really questionable move that came out of the weekend though was Sunday when ARod stayed on the bench instead of batting for Didi against a lefty. ARod is only batting .211 on the season but has 7 home runs and is paid to deliver in that situation. If you’re going ot leave him on the bench instead of giving him the chance to tie the game, you might as well just cut him.

As usual though i want to look for the positives. We won 5 of 7 at home and looked like a really good team at times. With a day off today, we have the chance to rest some guys that are banged up after a long stretch and try to continue to get right against bad teams starting Tuesday in Colorado with Eovaldi on the mound. You never want to have to play in Colorado because of all the home runs but with Eovaldi being a ground ball pitcher we have a better shot. The real question is, can he rebound from giving up 10 earned runs on 18 hits in his last 10.2 inning? With the Yankees facein Jorge De La Rosa and his 8.81 era, I feel confident that we can kick this road trip off with a win.

The Yankees Signed Ike Davis- With everyone who has gone near first base for the Yankees being injured and not a ton that other teams would want, that wouldn’t immediately end our season, this was the only move out there. Nick Swisher hit 2 home runs yesterday, but has struggled all season, and isn’t the answer we’re looking for. Davis won’t light the world on fire but he can possibly take advantage of the short porch and has actually played the position, unlike anyone else we have.

Old Timers Day Is The Best- No other team has a day like this and it is just so cool to see guys like Matsui come back and go deep.

Paul O’Neill mic’d up as also always a treat.

But the best story of the day was Brian Doyle who is fighting Parkinson’s disease after already beating leukemia, making it out not only to the stadium but to actually play and pick of a single is amazing.