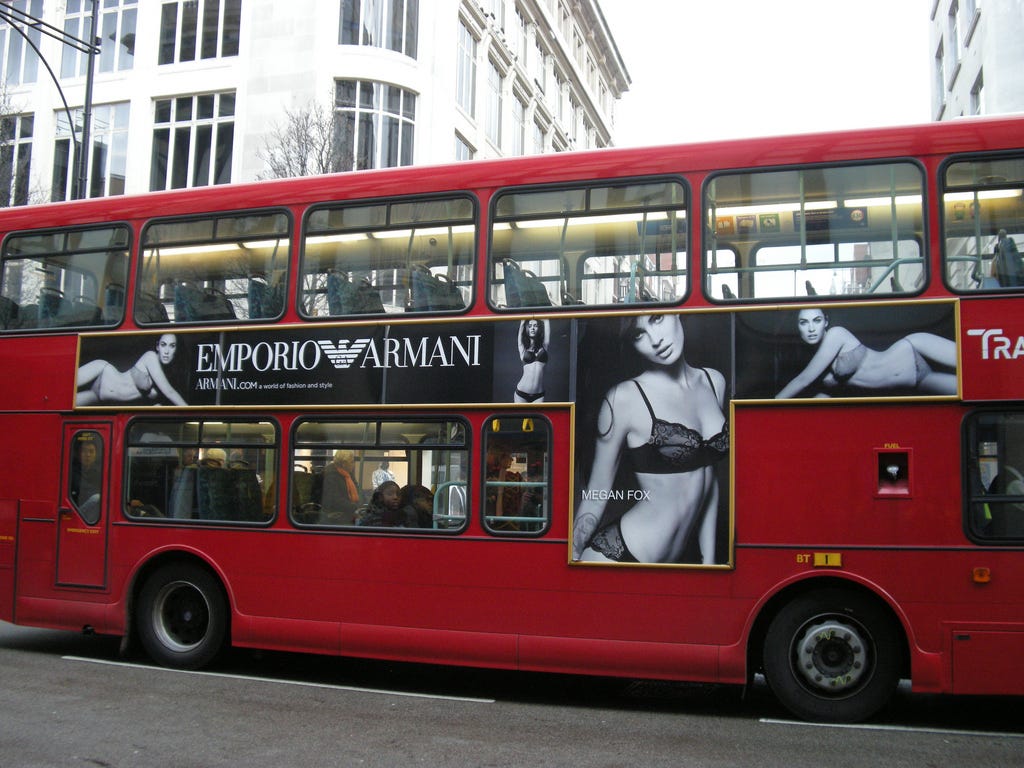 Khan, who was elected in May, said the ads targeted in the ban promote “unrealistic expectations” surrounding women’s bodies. “As the father of two teenage girls, I am extremely concerned about this kind of advertising which can demean people, particularly women, and make them ashamed of their bodies,” he said in a statement. “It is high time it came to an end.”

If your whole day or life or perception of yourself is ruined because you walked by a bus and saw something that made you feel shitty about yourself, the issue is not the bus. It’s not the ad. It’s not the hot chick. It’s not the “unrealistic expectations” put forth by some babe plastered (photoshopped) on the bus. It’s you. It’s deep and it’s complicated and it’s got nothing to do with starved models. It’s not their fault — it’s your fault.
Sex sells, everyone knows that. Sex is the most primal thing on earth and if you give it to us we’re gonna buy it. That’s not some contrived notion to make girls feel shitty about themselves; that’s just a free and open capitalist society. We live in one. London is one. So girls, don’t take your negativity out on the models. Don’t ruin the party for everyone because the guy you wanna fuck is talking to a hotter chick. That’s selfish and screams mental weakness. London is running a free and open society and in order to be successful in such a system you gotta give the people what they want. We (normal people everywhere) want hot chicks. We want them everywhere. We will buy shit from people that show us hot chicks and when we buy shit it’s good for everyone. That’s not body shaming that’s just economics.

PS – How about this mayor trying the LeBron card?

“As the father of two teenage girls, I am extremely concerned about this kind of advertising which can demean people, particularly women, and make them ashamed of their bodies,” he said in a statement.

Umm dude if your girls grow up emotionally damaged it’s not because they walked by the wrong big red bus. I know that and you know that. Stop saying we can’t have nice things because you’re just like every other guy and have no clue how to raise females.