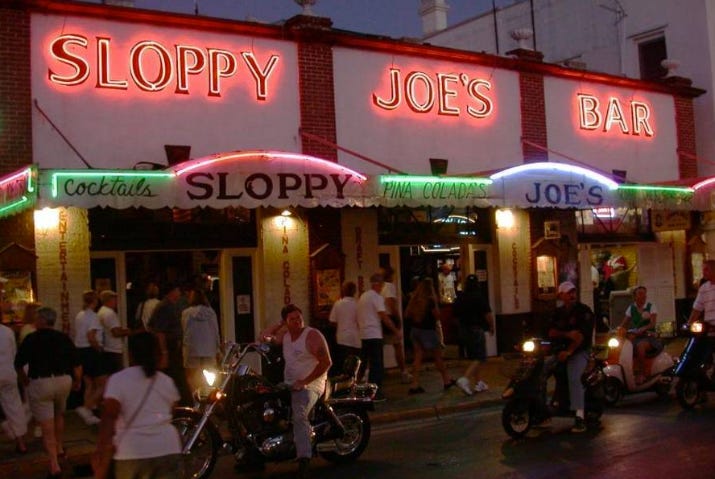 MB - In this bar fight at one of Key West’s most famous watering holes, it wasn’t a spilled drink or sleazy advance on someone’s wife that led to blows. According to the police report, a fight broke out between two couples this week when someone, who Friday remained unidentified, allegedly broke wind inside Sloppy Joe’s, 201 Duval St.

“The argument was due to someone farting,” police were told by a man who went to the hospital for a dislocated shoulder after the scrap.

Richard McBride, 53, and his girlfriend Sandra Stoner, 55, both of Naples, said they were caught up in a physical altercation after the argument arose “over a fart,” Officer Igor Kasyanenko wrote after last Monday’s incident. The couple said they were drinking with friends at the bar when Stoner traded words with an unidentified woman before getting out of her seat and confronting her in “an aggressive manner,” police said.

An unidentified man tried to pull the woman away as others began to step into the dispute, including McBride, who pushed the man, police said. The man retaliated by striking McBride in the face and McBride responded by tackling, Stoner told police. The unidentified couple took off and police said they couldn’t find them. Later at Lower Keys Medical Center, McBride said he didn’t want to pursue charges and signed a release form.

Straight up, we’ve all been there. Been in a crowded bar and then all of a sudden a waft of something so unholy that it had to come from the Devil himself creeps into your nose and all hell breaks loose. People swinging from chandeliers trying to figure out where that smell is coming from, and most importantly, who did it. Usually it’s the fat chick at the bar trying to play it cool, other times it’s your buddy who had the Chipotle for dinner, and other times it’s from the great unknown. And that’s when the rumbles start. Because it’s when you falsely accuse someone of being the mystery tooter, that’s when things get unhinged. That’s when the fisticuffs start flying. You cannot start pinning a fat juicy slobberknocker of a fart on someone’s woman. Even if you’re joking, nobody takes kindly to that sort of he-said she-said. Sandra Stoner probably just got her fake tits done, was all dressed to the 9s to impress Richard McBride, and now someone is accusing her of dropping a bar bomb? No bueno, ese. Fists have been thrown and wars have been started for much less. But I’ll tell you this- it won’t be the first time, nor will it be the last time a fight has broken out because of an unidentified smell. Sometimes it’s best to just Elsa it, but after a few daiquiris, sometimes you just can’t help but point out the culprit, it’s just in our American blood.