All things considered, this is probably my favorite group of people on television. Perhaps in television history. It’s remarkable that these people who have such an incredibly funny television show and are also seemingly so down to earth and genuinely cool continue to fly under the radar, but somehow they do. They never get shine for having the funniest show on TV for over a decade and they never get mainstream recognition for being simply awesome people, but they continue to crush it. The only tough decision for me would be deciding if I’d rather hang out with the characters they play or the real people because, despite the two groups being so different, they both seem like an awesome time.

PS – You can pee next to me is a fucking funny shirt. Almost as funny as DeVito’s face which may be permanently twisted up after doing it 50 times an episode for 9 years. 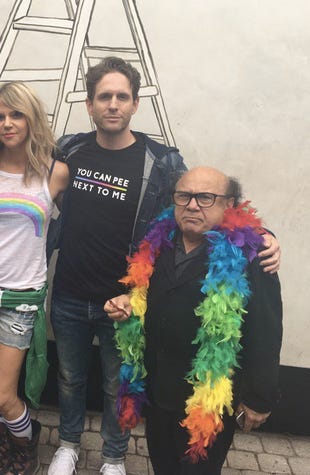