I hate the Penguins. You know this. I know this. The whole world knows this. But the Stanley Cup is so special that just for tonight, I’m willing to look past who hoists it up this year. Because it’s pretty damn difficult to not get a little romantic over anybody winning the Cup. It’s the greatest trophy in the world and it belongs to the greatest game in the world. You have 23 active players on the roster. You have a bunch of guys who are up in the press box for one reason or another. You have coaches. You have your management staff. And for 82 games and 16 more wins in the playoffs, they came together as a team to achieve their lifelong dream. That’s some special shit right there. Everybody who has ever laced up a pair of skates just once in their life has dreamed about lifting Lord Stanley’s Cup over their head. And these 23 guys got to do that tonight. Again, I wish it could have been anybody besides the Penguins. But if being able to appreciate a team of guys living out their dream makes me a shitty Flyers fan, then so be it. If being genuinely happy to see a guy like Phil Kessel lift the Cup over his head is wrong, well then I never want to be right. 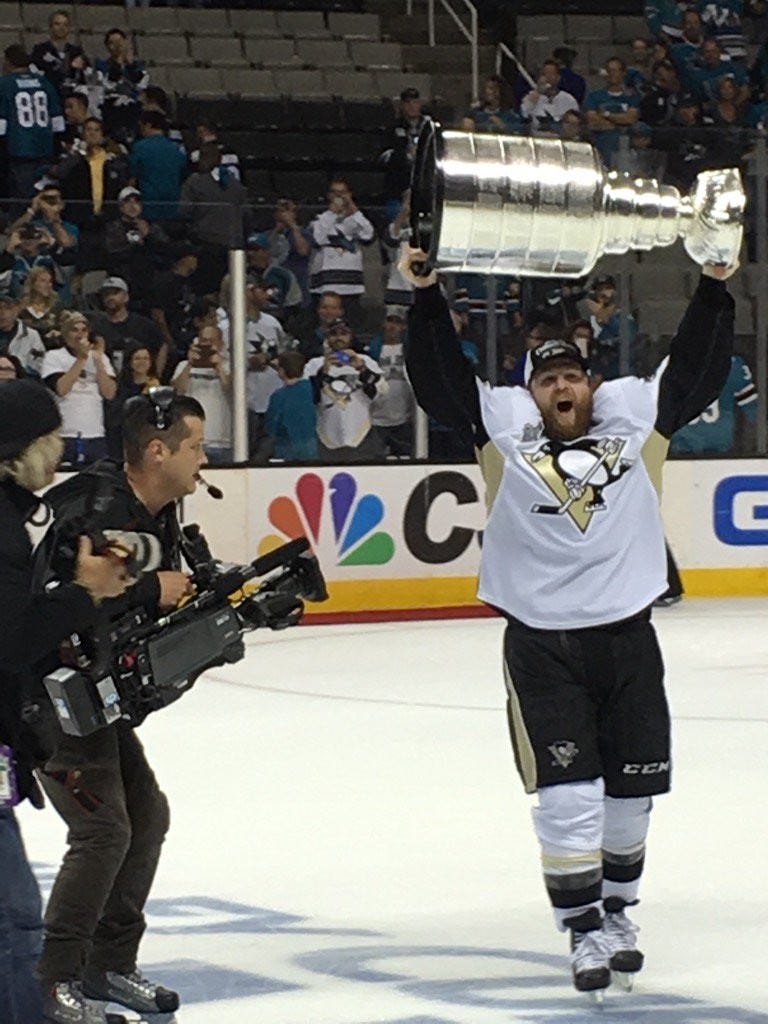 Also pretty great to see Pascal Dupuis out there in his uniform getting a chance to take his victory lap after everything he’s gone through this year. We’ll have some more on the actual game itself and maybe a little wrap up on the 2015-16 season as a whole tomorrow. It was one hell of a ride and thanks to everyone who checked in all season long. Gonna be a long wait until October but we’ll be right back after it with the draft in a couple weeks, Free Agency in July and the World Cup in September.

But for now, congratulations to the Pittsburgh Penguins. Congrats to stoolie Brian Dumoulin for lighting the lamp tonight. Congrats to Matt Murray for playing out of his mind this postseason. Congrats to Martin Jones for being a beast tonight despite a losing effort. Sidney Crosby definitely shouldn’t have won the Conn Smythe but I guess congrats to that jackass too. And congrats to all the Penguins fans out there (I’m speaking to the 6 of you right now) who get to point and laugh at me for an entire year now after I declared the Pens dead in January. You were right, I was wrong. You are smart, I am dumb.