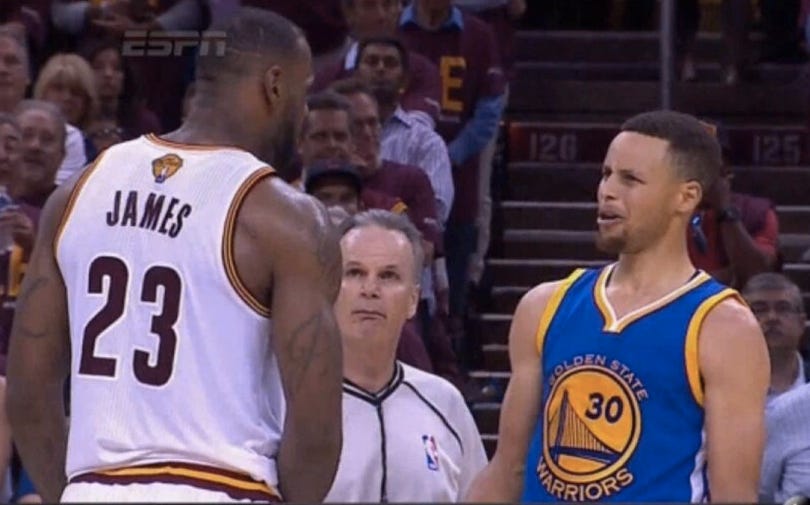 Best game of the series without question. It was nice to see after a couple blowouts the two team play what was a close game for the majority, and certainly didn’t lack drama. Game 4 gave us the first big chess move of the series with Lue bringing Love off the bench. Say what you want, but Love wasn’t half bad in his 25 minutes (11/6). He did disappear on the glass at times, but for a guy that’s probably going to be on the block, he showed me enough to be in on him at the right price.

Luckily for the Warriors, they got off to a much better start. Two early threes by soon-to-be-max player Harrison Barnes probably allowed them to exhale a little bit, and that’s really important because of course CLE was going to come out fast, given what happened in Game 3. It also didn’t hurt for Curry to see the ball go in on a couple threes himself, so right off the bat we knew we had something brewing. The fact that the Cavs lost this game is pretty Cleveland, but when you look at it, the WAY they lost it is even more Cleveland.

The Cavs may have had 16 offensive rebounds, they may have had more points in the paint (48) and second chance points (25) than GS, but when your entire offense is for a guy to put his head down and recklessly drive to the paint over, and over….and over and it continues to fail, you deserve to lose. Blame for this goes to everyone, Lebron, Kyrie, and Lue. I understand you want to be aggressive, especially at home, but at the same time after you repeatedly turn the ball over, and realize that hmm maybe a team that held opponents to shoot just 42% all year is maybe pretty good at that whole defending thing. The problem with CLE last night was they blew their load in Game 3 with their ability to shoot. Going 6-25 from three just isn’t going to get it done (they went 12-25 in GM3), and when GS knows you’re just going to keep the ball and drive to the basket every time, they can have all five of their defenders clog the paint. Day 1 stuff.

GS is actually pretty lucky that CLE went with this offensive strategy late, because early they were having all kinds of problems on the defensive end, especially Curry. Not the best defensive night for him, sure he scored 38, but what good is that if you’re giving up 34. Unfortunately for CLE, that’s what makes the Warriors so fucking good. It didn’t matter. Watching their Game 4 performance it was as if they collectively just decided to play better. If the Warriors decide they are good again, nobody beats them. So how did GS pull it off? Sure it was partly due to their shooting, but let’s not discredit the fact they outrebounded CLE, had 23 assists on 33 baskets, so they moved the ball, and with that came just 8 turnovers, which tells you they were on their game. The fact that defensively they held CLE to just 15 assists on 38 baskets tells you that they didn’t really have to worry about rotations and could just pack the paint. CLE wasn’t passing. The combo I always go back to with the Warriors is made threes and turnovers. Last night was 17/8 so you tell me how you beat a team that does that.

As for the “drama” that was just as entertaining as the game. Dave covered Lebron this morning, but I’d like to dig a little deeper. Yes, completely agree that Lebron was trying to act like a tough guy and step over Draymond, when in reality he’s a little bitch. That’s sad. But, it’s also a bitch move that Draymond continues to go after people’s dicks.

Anybody who has played any form of basketball can agree with that. He says he felt disrespected by Lebron’s attempt, so I can understand having some sort of a reaction, but a nut punch is such a bitch move. And, if we are going to give Lebron the rightfully deserved shit for complaining about not getting calls, then we also have to give Green shit for complaining about being disrespected.  All he fucking does is disrespect people on the court, and all the power to him, he mentally breaks people, but give me a break.

Safe to say this series is now a wrap, teams up 3-1 are 32-0. Something tells me a team that is soon to be the greatest of all time (they win and they’ve finally earned that title) isn’t going to be the first team in NBA history to not do it. And that makes me happy. Few non Celtics related NBA events give me a sense of joy more than Lebron choking. I don’t care if GS is the better team, seeing Lebron fail will never not bring a smile to my face.