Poor, poor Windy. He definitely has no idea what slide into your DMs means and just lived out his nightmare on national TV. Admitting that LeBron unfollowed him on Twitter, which then led to a pretty girl and two NBA greats laughing right in his face. Vince Carter in particular was having a grand ol’ time. Looking like some old man in the middle of a knee slapper. 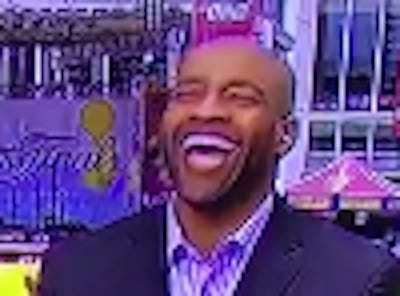 You know whenever Windy sees the numbers 69 or 420, he laughs his ass off even though he doesn’t understand what they mean. My buddy once called his sister a dildo when he was young and caught hell from his parents, even though he didn’t know what the word meant. Same thing happened to Brian here. Rachel Nichols is one of the only people in the media that doesn’t take shit from dictator Goodell. She sure as hell ain’t gonna take it from LeBron’s chubby white shadow. And making Windy take back his comment on air was equal to Brennan being forced to lick the white dog poop in Step Brothers. Firm but fair.

I’ve been rooting for the Warriors all series, but I think I may root for the Cavs just for tonight so LeBron lets Windy sleep outside of his crate for the night. I just hope that Riley Curry doesn’t show up at the postgame press conference. Windy no likey.

RIP Brian Windhorst. But welcome to the world, Cool Brian.