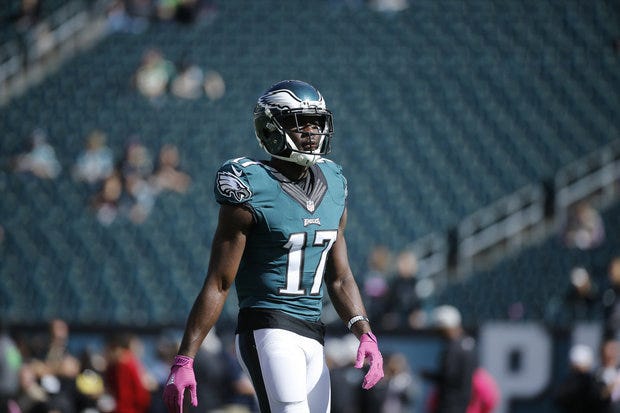 PhillyMag – Philadelphia Eagles wide receiver Nelson Agholor has been accused of raping a dancer at Cheerleaders Gentlemen’s Club, law enforcement sources have told Philadelphia magazine. A 27-year-old dancer told police that she was raped inside the club, which is located on Front Street near Oregon Avenue in South Philadelphia, about 3 p.m. on Thursday. At least two other Eagles visited Cheerleaders with Agholor, the sources said. The club is just a few minutes away from the team’s NovaCare complex, where they wrapped up their last spring practice early Thursday afternoon. “There was an allegation made against one of the [Eagles] players of a sexual assault that was reported by one of the female dancers,” said Police Commissioner Richard Ross. “Our Special Victims Unit is actively running on the investigation.” Ross said detectives are trying to track down video footage from the club. Ross said the Police Department has been in contact with Eagles officials. Agholor is expected to be interviewed by investigators some time soon. He has not been charged with any crime. “We are aware of the police investigation involving Nelson Agholor,” said Derek Boyko, a spokesman for the Eagles. “The organization has been in contact with Nelson and with the proper authorities in Philadelphia. Because of the legal nature of this matter, we will have no further comment.”