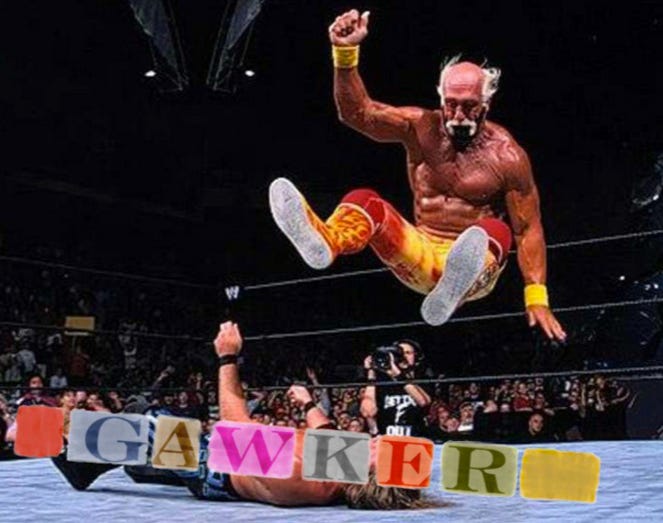 Recode - Peter Thiel is getting closer to his goal: Gawker Media has filed for bankruptcy protection and says it eventually plans to find a new owner for the company. Gawker and owner Nick Denton are making the Chapter 11 filing today, in order to avoid paying Thiel and Hulk Hogan the $140 million judgment they won in Hogan’s privacy trial earlier this year. Gawker has told it employees it still plans to fight the Thiel/Hogan case and to operate its publishing business while it does so. But it is also now formally entertaining offers to buy the company and says it has a firm bid from publisher Ziff Davis to buy the entire operation for less than $100 million.

Look, I’m not supposed to blog today. If I stare at the screen for more than 3 seconds my eyes light on fire. I’m risking potential blindness here, but as a leader of men, a man of the people, a fighter and a warrior, it was my duty to blog this. To step up to the plate and get out the report that Gawker has filed for bankruptcy. That they are doing anything and everything to avoid paying Hogan his 140 million dollars. They’ve lost. They’ve appealed. They’ve lost again. And now it’s come to this. No wonder Deadspin is using our name to get headlines today. They are a dead deer on the side of the internet streets. Hogan ran them over with his car and left them for dead. Now some rich guy is going to pull over, pick up the dead animal, and try to resurrect it. But he can’t save them. Nobody can. RIP Gawker. Or at least I fucking hope so. (I fucking hope so too dude.)