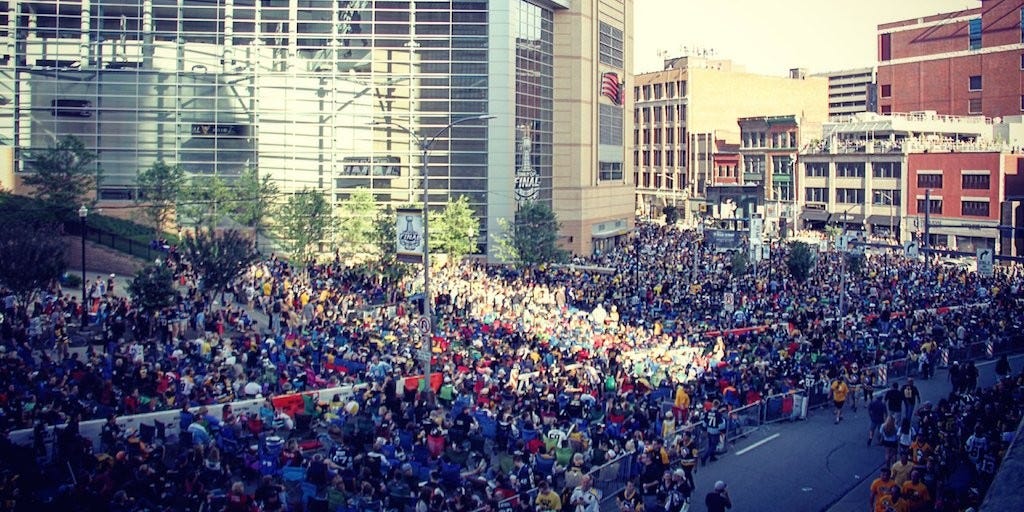 Credit where credit is due, the Penguins got a shit ton of fans to head out to the Consol Energy Center last night to watch the Pens try to win the Stanley Cup on home ice for the first time in franchise history. However…. after a 5 goal 1st period and a night where Martin Jones decided to give his best Sammy “Squid” Dullard impression with saves like this…

The Sharks took game 5 and the series is headed back to San Jose. Now obviously there weren’t going to be any issues with having that many disappointed and frustrated people all crowded together in one small congested area.It’s not like these people are from Philadelphia or anything. However, there were a couple of Flyers fans dressed as Penguins fans at the game last night who decided to settle things the way Gordie Howe taught them to.

Check out that tubby load of mayonnaise out there dodging punches like he’s Muhammad Ali’s fat retarded white brother.

You know your fight sucks dick when the news reporter who is standing literally right behind it barely even looks up to acknowledge the fight. 4 missed punches, one pudgeball grabbing onto ankles for dear life, just not a good look for anybody involved here. Chances that white dude is crosbysbrain? I’d say it’s pretty much 50/50.

Unrelated but related: The NHL needs to do something about this Stanley Cup Final schedule. 3 days between games is just downright preposterous. Especially considering Game 6 is going to run right up against Game of Thrones on Sunday. I don’t know what they need to do to fix this. I’m not much of an ideas guy, more of a guy who just likes to bitch and complain. But I’ll always say that we need to get rid of time zones in sports and just force everybody to live on EST. Or if it’s just the sheer distance the teams have to travel between Pittsburgh and San Jose between games, maybe think about playing in a neutral location. Because having to wait until Sunday after last night’s game is a real hunk of bullshit.