Still can’t really tell if this was just a random act of violence or a tribute video to Kimbo Slice. All I do know is that I’m going to have to start watching more of my local Telemundo station. Do I really want to watch Walt Hunter go spew some jibber-jabber at City Hall, give his little sign-off and then kick it back to Ukee without any sort of incident occurring in the process? No. That shit is for the birds. Give me Iris Delgado out there getting down and dirty with the real news. This is Filadelfia goddammit. And in Filadelfia, we fight. I’m sick and tired of all these weak ass reporters coming into this city with their fancy suits and fancy ties thinking they own the place. You want to report the news in this town? Fine. But you have to earn it. You have to take a 1-2 combo from this precious behemoth who looks like she could get herself a tryout to play on the line for the Eagles. 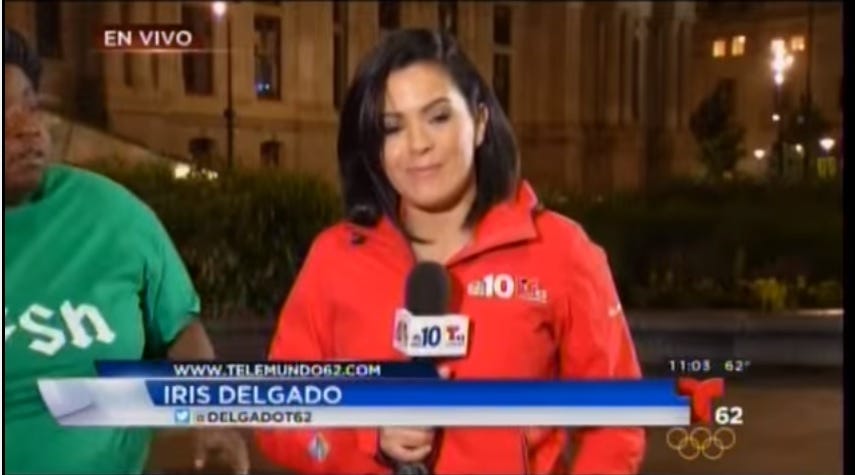 This is a gritty city and the reporters need to reflect that. Shoutout to Iris Delgado for earning her wings last night. Oh, and even though I couldn’t understand a single word Iris was saying, I guess this was probably about the proposed soda tax. Which is complete and total bullshit if you ask me. And obviously that would make a little more sense as to why this fat bitch was so pissed off. Momma Bear needs her Pepsi Max and don’t you dare try to slap an extra 1.5 cents per ounce on that shit. Mayor Jim Kenney can go ahead and suck a dick before goes all Bloomberg on us down here.