LVR - Benjamin Keeline was at his rock bottom. Broke and desperate, the professional poker player recently started working as an Uber driver and was forced to do the unthinkable to pay his bills. “I had to ask my father, who I hate asking for loans,” Keeline said.

But Keeline saw his struggles of the past few months disappear late Tuesday. The 30-year-old resident of Westminster, Colorado, won the World Series of Poker’s “Colossus II” No-limit Hold ‘em tournament at the Rio Convention Center and earned the $1 million first prize.

Keeline defeated Jiri Horak of Troubelice, Czech Republic, in a heads-up duel that lasted nearly three hours and ended a little before 11:30 p.m. with a thrilling, albeit slightly confusing, final hand. “The two biggest scores of my life have come when I have been at the hardest points. And I’ve had a really hard time lately,” an emotional Keeline said. “I almost didn’t come to the series because I could not pay my bills if I didn’t have a winning series.” 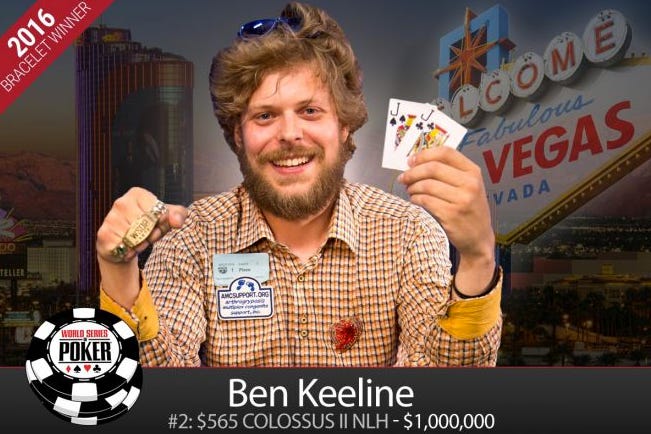 This is what makes the WSOP great. There’s always a few fun stories every year, and though it’s early, this is in the running for best story of the 2016 WSOP. Poker player blows all his money, gets a drive driving for Uber, gets a hail mary loan from father, wins a million bucks. I love this guy because he’s the perfect poker degenerate. Before this cash he had nearly $600,000 in live poker winnings. And he was driving Uber. Now, to be fair, he does mention he was backed*. But to have NO money in the bank to the point he was driving for Uber, that means he had some late, degenerate nights at the tables, and that’s what it’s all about. What’s the point of making money if you don’t take shots at the blackjack table or roll the dice at craps? Scared money don’t make money! And now this guy is back, baby! He’s back. Hopefully he’s a little smarter about it this time, but if I know him like I think I know him, he’ll be in the $111,111 tournament later this summer.