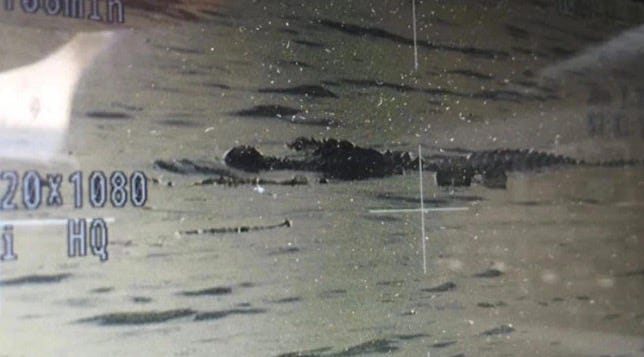 LAKELAND, Fla. (WFLA) — Lakeland police are investigating at Lake Hunter where a large alligator was seen with a man’s body in its mouth.

Tuesday around 1:40 p.m. someone at Florida Presbyterian Homes called 911 to report seeing an alligator in the lake that had a body in its mouth.

“The officers got here and the alligator still had the person. He let the individual go, he is deceased, looks like this person may have been dead more than a day,” said Sgt. Gary Gross from Lakeland Police.

It’s not clear if the gator killed the man or how he died. “We don’t want to speculate but I will say when the officer got here the alligator did a roll and had the person in contact with him,” added Gross.

“The officers immediately got their firearms out in case the gator comes up. Once he left they didn’t want him coming back and pull the body back out. That did not happen,” said Gross. The alligator then released the body from its mouth.

Annnnnnd this has been your daily blog on the fucked up state of Florida. Every day it’s something new with these guys. Crazy arrests, mugshots, insane drug fueled viral videos, unidentified sea monsters, busts for drugs we haven’t even heard of yet. Today it’s a massive “aggressive” alligator found with a freaking human body inside of it’s mouth. Casually rolling up to the shoreline chomping on a dude’s carcass. Ho hum, no big deal. I swear to God if it wasn’t for Disney World that state would be the worst place ever.

I do think it’s kind of fucked up that they hunted this thing out to the middle of the ocean and shot it though right? Like it’s an alligator in it’s natural terrain doing what alligator’s do. If you swim with the gators they’re gonna eat your ass. If you murder somebody and dump him in a swamp the gators are gonna eat his ass. What did this gator do wrong exactly besides follow his natural instincts? Somewhere up in Heaven Harambe is shaking his head at this shit.