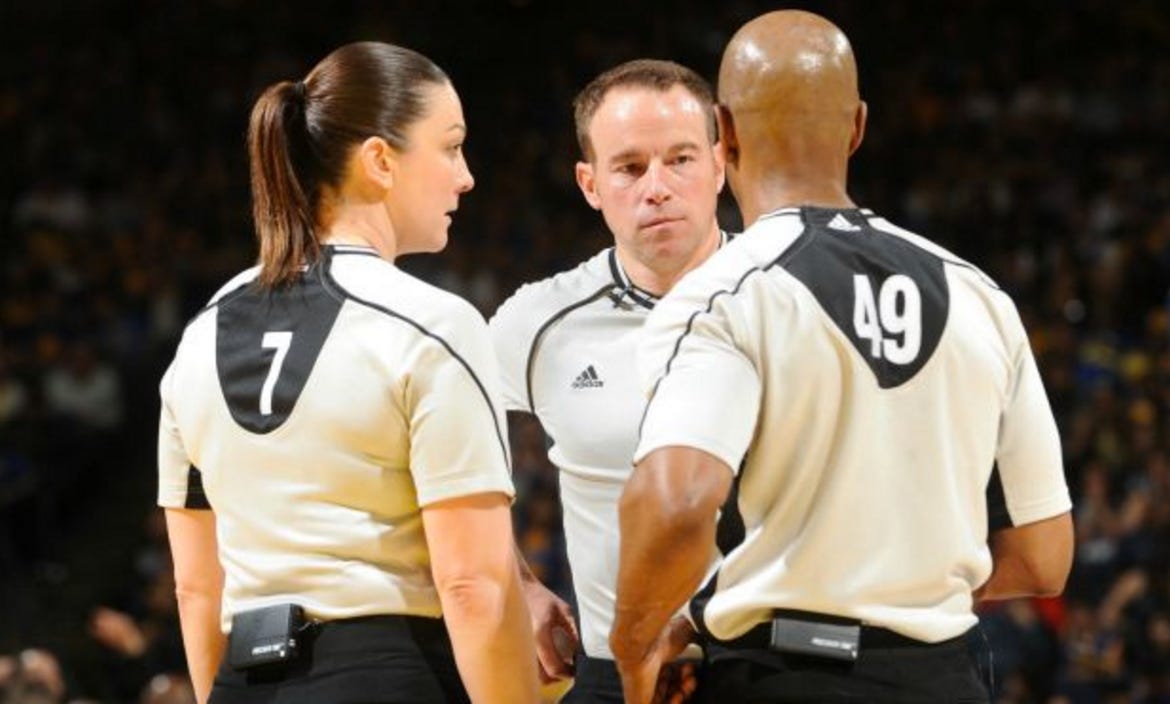 Fox Sports – NBA referees would like to go back to a simpler time — when fans could complain about their bad late-game calls but didn’t have confirmation from the league on just how bad they were. Two games into the NBA Finals, the National Basketball Referees Association issued a statement Tuesday that advocates ending the league’s L2M (Last 2 Minute) reports, which have been the last word on questionable late-game calls since the NBA began issuing them in March 2015. L2Ms are released the day after games and stand as the league’s comment on whether the most disputed calls were correct. According to the league’s rollout of L2Ms, a senior basketball operations manager or referee manager reviews such plays in games within five points in the final 2 minutes of regulation and overtime. You can read the NBRA’s complete airing of grievances and suggestions for change here, but the grievances are the interesting part:

• Transparency does nothing to change the outcome of the game.

• Focusing on officiating statistics encourages stat-oriented, versus game-oriented, officiating. It is in the best interest of the NBA and its fans to encourage and develop game-oriented referees that balance game flow and fair play.

• Efforts to promote transparency have encouraged the idea that perfection in officiating is possible. Perfection is neither possible nor desirable; if every possible infraction were to be called, the game would be unwatchable and would cease to exist as a form of entertainment in this country

• Transparency has been misused as a catalyst by some teams to mobilize fans against the officials in an attempt to coerce more favorable treatment.

• While the goal of transparency was to promote understanding and credibility, there is no evidence that progress against these goals is being made.

Being an NBA ref sucks. They get paid well (250k-600k) but that shit still sucks. First of all youre constantly running. No thanks. Im all set on running. Basically doing suicides for a living. Pass. And secondly the world fucking hates you. Never been an NBA ref that anybody liked. Nobody has ever said “Oh good, XYZ is reffing tonight.” And even if there was, minimum 50% of people are still saying “Oh fuck that scumbag ABC is reffing tonight.” Its a thankless job. Nobody ever says when a game is well officiated. 1 bad call can ruin an entire performance. You take all the blame from fans all the time. It blows.

And now with these new reports issued every night, even your own league hates you. Its one thing for the fans to sit at home and complain about every call but when the League is drawing up employment review sheets every night like “Yup. They’re right, guys. You do, in fact, suck. We quantified just how much right here in this report!” And while as a sports fan you love the accountability, if youre a regular human being with a job you gotta feel for these dudes. Imagine work performance reviews EVERY fucking day? Every day at 5pm your boss comes down to your cube and tells you all the shit you did wrong? You shouldnt have sent this email, shouldnt have said this on that call. This report is wrong this spreadsheet is incomplete. Every day. You’d shoot up the office by Thursday happy hour.

So yea, NBA refs suck. Yea, there needs to be some level of accountability for your work. But run a bazillion miles in these refs’ shoes and then have the entire world shit on you every single game and tell me this doesnt totally suck. At least MLB umps get to stand still and get shit on by everyone nightly. NFL refs work like 10 times a year. No doubt being and NBA ref is the bottom of the barrel of quality of life.