HP – McDonald’s Japan is hoping to spark a gold rush by giving away an 18-karat gold chicken McNugget, valued at around $2,000, as part of a social media contest featuring a bizarre new character. And apparently it’s working. The offbeat contest has blown up on social media after the fast food chain revealed the unusual prize along with a banana-suited sauce thief named Kaito Nuggets — aka Phantom Thief Nuggets. According to the contest’s rules, participants are tasked with helping unmask the nugget-crazed villain by posting when and where he’s spotted using the hashtag ??????? (which is “Kaito Nuggets” in Japanese, according to the chain). 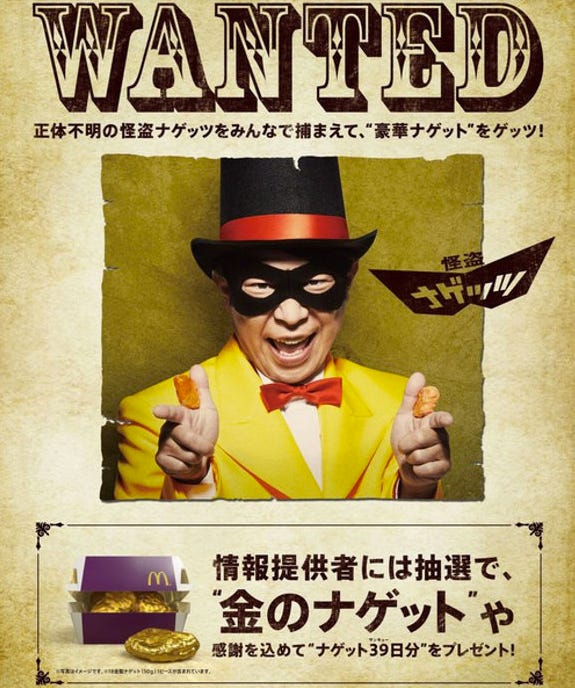 We’re such a simple species of people. Nothing ever changes with us. We all wake up in the morning, brush our teeth, go to work, and go CRAZY for contests where something covered in gold is prize. No matter what time period, what the contest is for, or how you win it, if you give away a gold anything, we go nuts about it. It’s wired in the human DNA. If a fast food contest is going, we must all get involved. When the McDonald’s game launched for the very first time, it was mayhem in the streets. Absolute mayhem. I think I ate McD’s every day for 3 weeks. People at school bringing in Vermont Avenue and Marvin Gardens doing swaps and shit. It was some shady underground trading between 4th graders. Now mix in a prize being something covered in gold, and it’s bedlam.

So of course McDonald’s is putting out some wacky Japanese commercials with the prize being a golden nugget. Because at the end of the day, who can really stop themselves from trying to win a solid gold chicken nugget? People in Japan don’t even eat chicken nuggets. They just eat rice and sushi all day every day, but if McDonald’s is giving away a golden nugget, the Japanese folks are going to start eating them. It’s Willy Wonka meets Kobayashi.