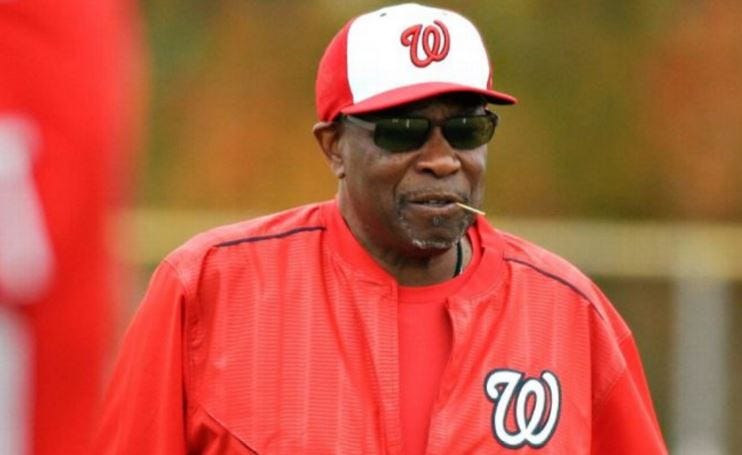 From the second that the Nationals hired 66 year old Dusty Baker and his 21 years of managerial experience, we knew what we were getting. We were getting someone who could keep the clubhouse in order and the players loose (something that Matt Williams failed at), someone who could potentially harness his decades of experience coaching stars like Barry Bonds and maybe take Bryce Harper to an even higher level, and someone who could go through toothpicks like they were candy. We also knew that we were getting a guy that just does not understand the concept of On Base Percentage, statistics, or any of that mumbo-jumbo, a guy that shows clear and often ridiculous preferences to veteran players, and a guy that is known for overworking and ultimately ruining promising young arms.

For the first two months of the season, Dusty’s glaring flaws have, for the most part, been obscured by the division lead, the rotation’s successes and the seasons that guys like Ramos and Murphy are stringing together but this team is never going to reach its full potential if its manager is actively impeding progress. The first big issue that Dusty continues and continues to make is playing guys like Ben Revere or Michael A Taylor at the top of the order. His apparent insistence on Danny Espinosa being the starting shortstop (and, for that matter, Stephen Drew occupying a 25-man roster spot) over Trea Turner is absolutely bonkers and makes no sense in terms of service time any more. Finally, the way that he has used Felipe Rivero has gone under the radar but its starting to look like Rivero might be the first victim of the Live Arm Killer. 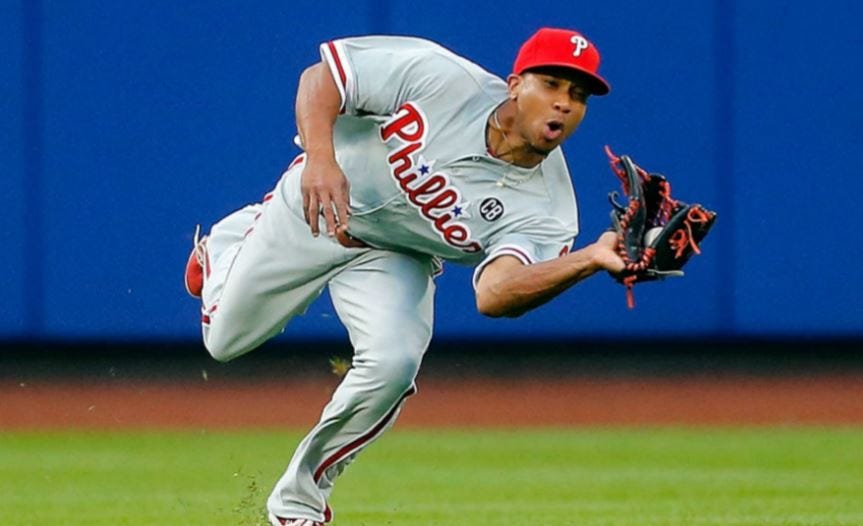 The Nationals leadoff batters are hitting a blistering .184/.231/.296 this season which is firmly 30th in baseball. Take a guess on the on base percentage of the Nationals’ #9 spot, you know, the place where the pitchers bat. It’s .231. That’s right, the Nationals pitchers are getting on base at the same exact rate as the lead-off hitters. Not only that but the 9 hole actually has a better slugging percentage (.316) than lead-off hitters. Dusty’s insistence on hitting the outfielders at lead-off has cost the club a few wins and we need much, much better on-base rates from our lead-off guys than what we are getting. I do think that Ben Revere could be the answer hitting lead-off at some point later on in the year (even with the lack of walks) but he has been a blackhole so far and he’s gotta drop in the order until he gets his shit together. 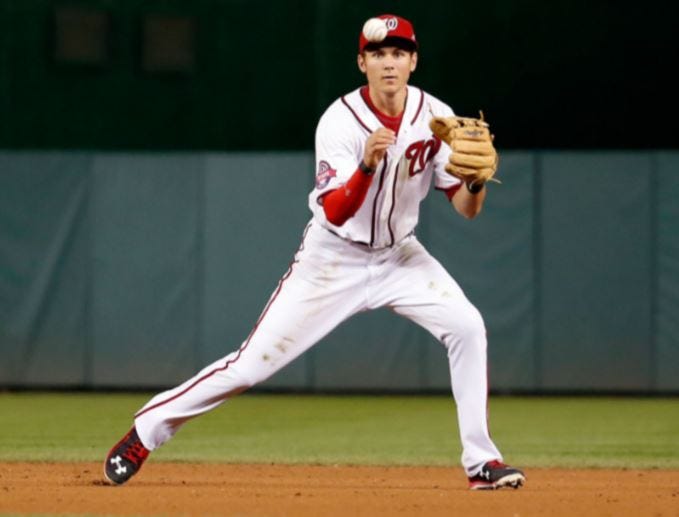 Someone who could actually be a pretty good lead-off option was just demoted after going 3-3 in his only MLB start this season. I gave my thoughts about Turner a few days ago and reasoned that he would be up for good (because he is the best option at short and the goal for most teams should be to, you know, win games) but Dusty pulled a classic Dusty and Turner is back in the minors. Nate talked about the absurdity of Dusty’s love for veteran players and pointed out his affinity for Scott Hatteberg over Joey Votto. The good side of that is that at least Votto turned into a star while the Hatteberg experiment ended. A more gloomy example might be that of Reds catcher Devin Mesoraco. Mesoraco, a 1st round pick (much like Turner) and a top 20 prospect in all of baseball (much like Turner), toiled behind Ryan Fucking Hanigan from the time of his debut in 2011 until he finally got the shot at starting mid-way through 2013. Partially due to his time on the bench, Mesoraco struggled at the plate but really broke out once Dusty was finally gone from the Reds (and hit 25 homers .279/.359/.534 in his All-Star 2014 campaign). Since Mesoraco’s break-out year, he has dealt with several injuries but there is no denying that his potential was unnecessarily and foolishly squandered by Dusty Baker.

Turner could very well be in the same situation as Mesoraco and it hurts to see all of his talent squandered while Stephen Drew eats up a roster spot. Also, doesn’t Turner fit the mold of Dusty’s prototypical lead-off guy? Dusty loves batting centerfielders or shortstops first and he looks for speed. Turner fits both bills though maybe Dusty doesn’t think that he’s fast because Turner is white? I’m hoping that Turner is back up soon and that he is essentially forced to start but, judging by Baker’s history, I wouldn’t hold my breath. 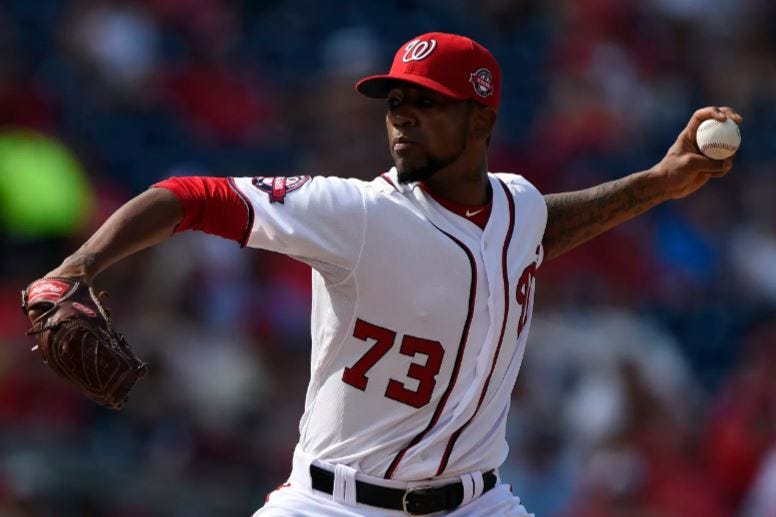 Finally, a storyline that has really flown under the radar is Dusty’s overuse of Felipe Rivero. Rivero is a very promising young reliever but he’s showing signs of breaking down already (5 earned runs in his past 1 IP). There is a good reason for Rivero’s struggles and its that he is pitching almost every other day. In 2015, he pitched in 49 games all year. Through 57 games in the Dusty era, Rivero has taken the mound 29 times (an 82 appearance pace), I don’t see him continuing at quite this pace but it is very evident that he is being over-used and if he were to hypothetically appear in 82 games this year, that would be the most pitching appearances in a single season since Jonny Venters in 2011. Venters was one of the most dominant relievers in all of baseball during the 2010 and 2011 season but was clearly over-used, took a step back in 2012, went through multiple Tommy John surgeries, and has made a total of 1 appearance in the minor leagues (and 0 in the Majors) in the past 4 seasons. Go through the history of guys that lead the league in appearances, their future career prospects aren’t too pretty. Felipe Rivero is an important piece in the Nats pen and hopefully there is someone over there to make sure Dusty doesn’t waste this arm like he’s done so many times in the past.

The Nats are in 1st which definitely makes Dusty a lot easier to bear but his lineup decisions are costing us wins, his contempt for young players like Trea Turner are both hurting us in 2016 and could impede Turner’s future development, and his overuse of Felipe Rivero could ruin a potent young arm in the Nats’ bullpen.