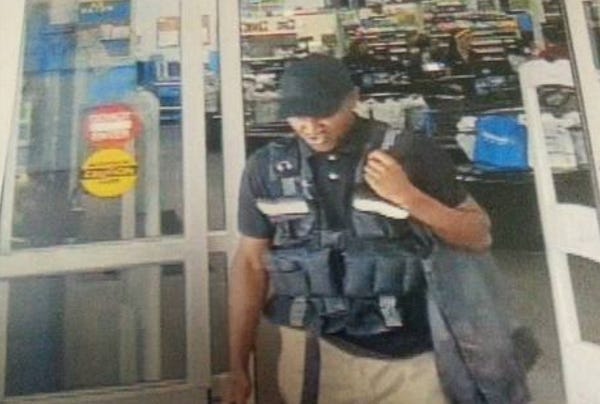 Fox - Investigators were working Monday to identify a man who took more than $75,000 from an Oklahoma Wal-Mart after disguising himself as an armored truck driver. Bristow Police Chief Wayne Williams said authorities in northeast Oklahoma have received some anonymous tips about the identity of the man whose image was captured by a video surveillance camera. Authorities say the suspect entered the Wal-Mart store in Bristow about 10:30 a.m. Saturday, walked to the cash office, signed for the deposit and walked out of the store. He drove away in a dark four-door Chevrolet. “He came to the Wal-Mart kind of dressed like a Loomis armored car driver,” Williams said. Wal-Mart employees called police after the real Loomis employee arrived about 45 minutes later. Bristow is about 35 miles southwest of Tulsa.

How shocked do you think this guy was when it worked? When he walked in, signed the dotted line, and they handed him over $75,000 and gave him a slap on the butt on the way out, I’m shocked he didn’t kiss each and every Walmart employee on the lips. He was probably a second from being like “uhh, are you sure?”, just because it was too easy for him. I would love to know what he’s thinking as he’s walking out. “Play it cool, play it cool, oh my god they really just gave me 75 grand what fucking idiots!..play it cool, play it cool”. It’s just remarkable how simple it was for him. Throw on some clothes he found at Goodwill and walk out of an Oklahoma Walmart with 75k. I love the police chief throwing mad shade at the Walmart employees too. “He came to the Wal Mart kind of dressed like a Loomis armored car driver“.

Now if you’re the guy who robbed the Wal Mart, LAY LOW. You’re in Oklahoma, they ain’t gonna find you unless you do something like this again. Take that 75k and put it under your mattress and just go on with life. This was a once in a lifetime robbery, don’t blow it bro.