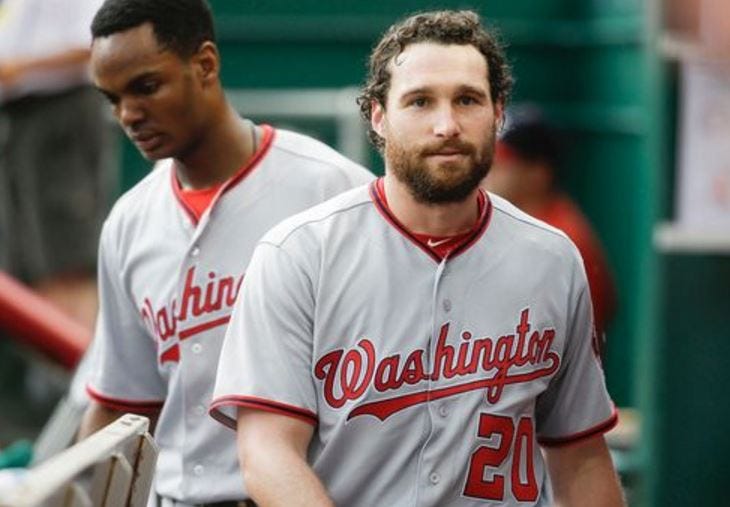 Sunday’s game did not start out swimmingly for the Nats and Tanner Roark surrendered 7 hits and a walk to the 21-36 Reds in the 2nd inning alone. The 5 runs Cincinnati scored in the 2nd turned out to be no match for Daniel Murphy and the Nationals who ultimately won it all 10-9 thanks to a fortunate error by the Reds’ catcher and some back-to-back blasts.

Even with Roark’s rough outing, his 3.21 ERA ranks 33rd in all of baseball (and 21st in the NL) and I’ll have a blog detailing all of his successes (and short-comings) tomorrow. Tanner Roark’s atrocious 5 run 2nd inning would bury most teams but the Nats bounced back soon after and scored 10 straight.

Daniel Murphy kicked off the barrage and knocked his 10th homer of the season which means he has already surpassed his entire HR total during his All-Star 2014 campaign. After winning the NL batter of the month in May, Sunday’s game was Murph’s first big day of June. Right after Murphy’s blast, Wilson Ramos went yard and I swear that the Nats are going to break the record for most back to back homers in a season. It seems like every third game you’ve got Wilson Ramos and Daniel Murphy (or even Danny Espinosa) or Jayson Werth and Anthony Rendon or some other combination of batters going back to back.

The heart of the lineup went a steady 9 for 15 yesterday with 5 RBI and 7 runs scored and when the superficial stats rank Bryce Harper as the worst of the Harper-Murphy-Ramos triumvirate then you know that shit is going pretty well. All three of these guys could certainly be starting the summer classic in San Diego this July. While the middle of the lineup is doing their job and more, the rest of the lineup definitely has some major room for improvement and there is absolutely no excuse for Dusty batting Ben Revere and Michael A Taylor first and 2nd in the order when neither of them are even batting .200.

We haven’t been bombarded with as many Dusty screw-jobs as I would’ve guessed back when we all initially learned of his arrival but his insistence on starting guys like Michael A Taylor or Ben Revere at the top of the order is just mind bottling. These guys are not producing at all right now, what makes you think that they should be getting the most at bats in the game? I don’t care if they’re fast, I don’t care one bit because if they are not going to get on base, you won’t be able to utilize their speed. Based on past Dusty experiences in other cities, I don’t think its all that likely that he changes his ways at all but we could, at the very least, vent about his struggles and hope that Ben Revere finally starts to come around.

Ultimately, Sunday’s game was an impressive comeback and included impressive performances from Sammy Solis and the 3-4-5 batters in the Nats lineup but Dusty’s inadequacies are starting to come to a head and regardless of how much talent this team might have, the past few years have proven to us that boneheaded managerial decisions can stymie even the most talented team’s playoff chances.