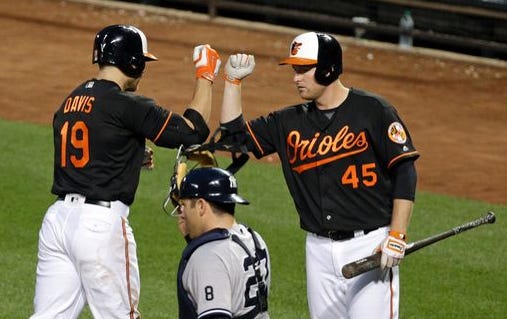 Over the weekend the O’s took 2 of 3 from the Yanks and now sit #percentagepoints ahead of Boston for first place at 32-23. I don’t want to completely bury the Yankees, but it is not looking good for them. They’re old, injured, rotation is pretty average, and they literally have 3 good guys in their bullpen. Girardi will probably (unfortunately for us) be fired soon, and hopefully people look back on this series and say this is where it all went wrong for New York.

Much like the last 2 games of the Boston series, the O’s fought back to win these games, and they did their damage off the Yankees big guys. Some Runs DMC didn’t really have an answer for the O’s power hitting lineup. So far this season against the Yanks, they’ve gotten a walk-off hit off Andrew Miller, handed Dellin Betances 2 of his 4 losses on the year, and gave Aroldis Chapman his first blown save of the year, not too shabby.

Game 1 of the series had the O’s overcome a 3-run deficit to get the win. Tillman was a bit shaky in this one, giving up home runs to Carlos Beltran, Alex Rodriguez, and Austin Romine. You can’t do that, not this year, not to these guys. But the Birds fought back with a Wieters single to score 2, and a Jonathan Schoop double to tie it up. Betances came in for the 7th and gave up the eventual winning run on a Manny Machado infield hit. Britton came in for the save, and that was all she wrote.

JJ joined me at Camden Yards for Game 2, we drank at Pickles, we laughed, met some cool stoolies, we ate some great food, we drank some more at Pickles, I yelled at every Yankee fan I saw with a jersey with a name on the back, and we saw the O’s almost mount a great comeback, coming up 2 runs shorts, but that’s why you can’t spot a team a 7-run lead. Trumbo took over the MLB lead in home runs with 18, Jones continued his hot hitting ways with a 3-run shot that cut the game to 7-6, but the O’s couldn’t pull any closer. Bad guys win. 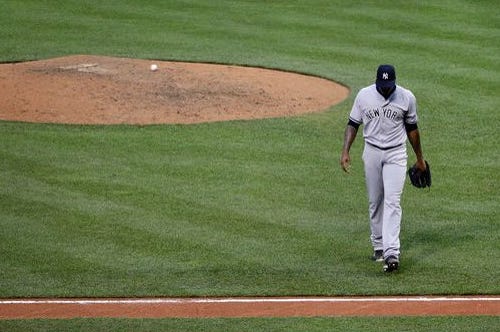 Game 3 was another game the O’s had no business winning. Kevin Gausman was his normal, awesome self.  7 hits over 6 innings, 5 Ks, and only 1 run given up, but 0 run support by the offense for him. The O’s couldn’t touch CC, who has been great his last 2 times out against the O’s. The Yanks were up 1-0 heading into the 8th inning, which is when the rains came. Birds got 2 on when it started to pour at the stadium and there was an hour and 40 minute rain delay. Aroldis Chapman had been warming up and was heading to the field when they threw the tarp on, not sure if that threw off his rhythm, but Chapman didn’t look like his normal self when the game resumed. Schoop struck out against Chapman, Franky Pena poked a single into right field which sent Trumbo to third, and then red hot Matt Wieters pinch hit for Ryan Flaherty and came through with a bases clearing single to center on a 101 mph fastball, eventually moving to third when the throw in bounced away from McCann. Hell of a comeback, and put an exclamation mark on another series win. Getting the wins off Betances, and roughing up Chapman was fantastic, especially when you see that the Yankees were 25-0 when leading after 7. Enjoy your trip up 95 Yankee fans, thanks for coming out again.

Kansas City limps into town tomorrow for a 3 game set. Losers of 4 in a row, I would love nothing more to crush them and make it 7 losses in a row. Never forget #2014.