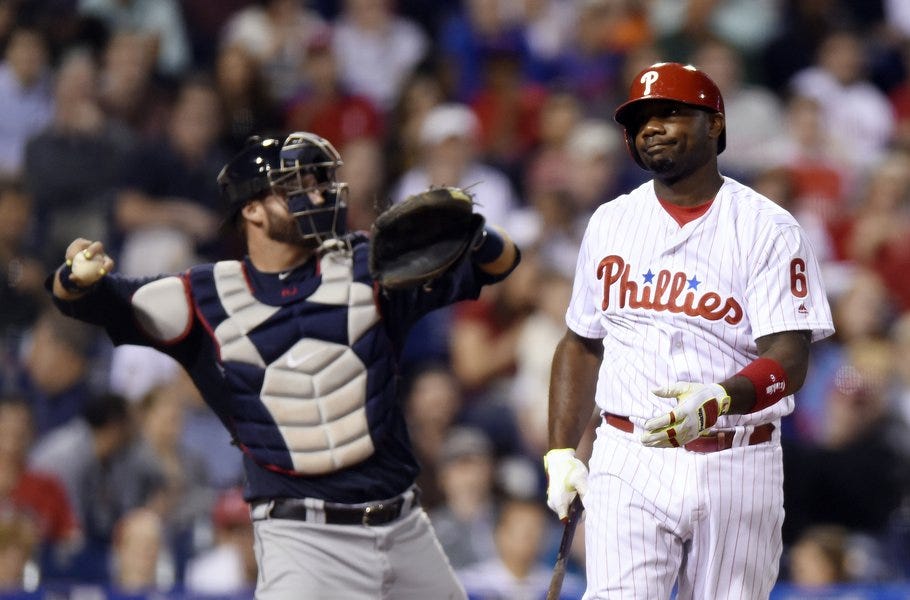 Philly.com – Ryan Howard’s difficult season took an ugly turn on Saturday afternoon when a fan threw a beer bottle at the Phillies first baseman following the team’s 6-3 loss to Milwaukee.

The bottle landed near Howard’s feet as he walked back to the dugout.Howard alerted a security guard at Citizens Bank Park, who picked up the green aluminum Bud Light Lime bottle. It was tasteless, Howard said.

“I’ve done too much in this town to have that kind of stuff,” Howard said. “If you want to yell out ‘You suck,’ that’s whatever. But when you start throwing stuff, that’s when stuff gets personal.”

Salmon shorts, boat shoes with black socks, a dirty jersey and an Apple watch. Yeah, this dude is a certified douche nugget.

Before we get started here, I think that we need to finally come together as a society and make an official ruling on how we feel about Bud Light Lime. Personally, I have no problem with putting back a few on a nice summer day. Would I make it my go-to beer for an entire day? Not necessarily. You get sick of them after a while. But they’re still a tasty little treat and nobody sucks harder than the dude who goes around calling people pussies for enjoying a cold BLL. I could be off base here but my final verdict is you’re good to go with the Limes but I’d still rather go with a Shandy if I’m picking a summer beer. Now on to the whole Ryan Howard aspect of this story…

Listen. I get it. Ryan Howard sucks. Ryan Howard is a bum. Ryan Howard is being paid $25 million this year to suck and to be a bum. It’s frustrating. It doesn’t make any sense and I don’t think there’s a single person in the world who has a worse standing with the people of Philadelphia right now than Ryan Howard does. With that being said, no, of course you should never throw a beer bottle at Ryan Howard. For all of us who are under 30, the 2008 Phillies were the only championship team in Philadelphia that we ever got to witness. The ONLY major Philly championship in our entire existence. And that championship doesn’t happen without Ryan Howard. The man should be a revered god in this town. Unfortunately, he’s run out of good will in this town and that is what brings us to yesterday’s “fiasco”. Now to be fair, I’d gladly get paid $25 million per year to get beer bottles thrown at me. They could be glass bottles for all I care. Is Ryan Howard acting like a little bitch because an aluminum bottle was thrown in his general direction and landed at his feet? Yes. Yes he is. But Ryan Howard is a bitch and bitches tend to act as such. Moral of the story here is that everybody sucks. Ryan Howard sucks. The guy who threw the bottle sucks. You suck. I suck. We all suck.

P.S – between throwing a beer bottle at the MVP who brought Philly our only championship since 1983, throwing wristbands on the ice in a night which the Flyers were honoring the life of Ed Snider, and this tweet right here…

… it appears that Philly is well underway in turning full heel. No one likes us, we don’t care.