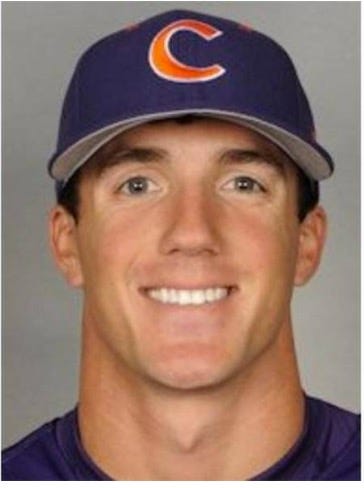 The State – Agents seized almost $2 million in cash and property from a former college baseball player, who pleaded guilty with a friend Wednesday to federal drug charges.

U.S. District Judge Terry L. Wooten accepted guilty please from Bradley Lewis Felder, 27, and Everette “Rhett” Carter Berry, 28, on charges, including conspiracy to possess and intent to distribute and to distribute a quantity of 3,4-Methylenedioxyethylcathinone Hydrochloride (commonly known as “molly”) and at least 50 kilograms of marijuana.

Felder, of Bowman near Orangeburg, was listed as an outfielder for Clemson the 2012 season on clemsontigers.com, as well as a player during the 2008, 2010 and 2011 baseball seasons at the Citadel.

I was gonna say this is the problem with focusing on baseball, way too hard to make it in the pros. A trillion guys get drafted, you end up in some quintuple-A farm system, working your way through the minors for 19 years, chances are you never make it to the show – end up burning out and resorting to dealing drugs.

But then I saw the kind of numbers Bradley Felder was doing here – my man was moving some SERIOUS weight.

Drug Enforcement Administration agents began investigating Felder, Berry and others in 2013 for importing and distributing high-grade marijuana and molly in Richland and Lexington counties.

Investigators learned Felder was importing the marijuana from northern California and the molly from an unknown source in China. Felder rented several houses and apartments in the area primarily to receive shipments of molly, the release stated.

Felder reportedly paid friends, including Berry, in cash or marijuana to accept the packages.

During the investigation, agents intercepted about nine packages of molly, each containing a kilogram, and about $150,000 in cash from Felder.

I mean if you can’t get an MLB contract, this is a pretty good second option (aside from the whole illegal, getting caught and going to prison part) – judging from what they found at the farm, it was a really, really, really good thing for a while there.

Law enforcement arrested him in the parking garage at the Gates of Williams Brice Apartments near the University of South Carolina’s football stadium. After the arrest, agents seized $1,481.90 in cash, several cell phones, a loaded .45 caliber pistol and two watches valued at $64,000 and $46,356.

Pictures on the cell phones showed stacks of money in bundles and plastic containers. In February, Felder led agents to his family’s farm in Bowman, where they unearthed a bag containing $1,768,031.

2 million bucks buried on a farm. Thought you only saw that shit in the movies. False, you see it from Citadel/Clemson baseball players in South Carolina IRL.

[h/t Blanco via The State]