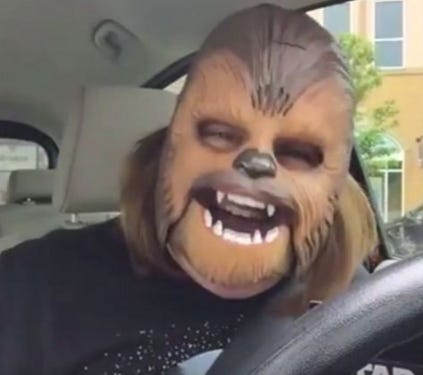 The world works in mysterious ways. It used to be you worked hard, punched that time card, put on your hard hat, and one day you too could be rich and successful. That still exists, but now you can skip that line and hop right to the front if you go viral on the Internet, and by golly, that’s what Chewbacca Mask Lady did. She made the most watched video in Facebook history…yes, in Facebook HISTORY, and now it’s paying off big for her.

Time - A Florida university has offered full scholarships to the family of the mother who uploaded the video of herself laughing in a Chewbacca mask to the joy of the internet.

Candace Payne, as well as her husband and two children, can all attend Southeastern University for free, the university announced. “Candace has inspired us and others with her joy,” said Kent Ingle, the school’s president, in a press release. “We want her and her family to experience some of that same joy through this gift.”

The announcement is the latest in a string of attention Payne has gotten since uploading the viral video last month. She made the rounds on talk shows and rode in a car with J.J. Abrams and James Corden.

I can’t even try to hate it. Good for her. Did you see the video? Just a happy fat lady (her words, not mine) who finds simple joys in life. Just spreading those #PositiveVibesOnly and people dig that kind of shit. In a world of sadness and cynicism, her simple enough Chewy Mask video brought people happiness, and people are repaying her.

It’s not the first time social media has awarded good people. Every time a homeless guy returns a briefcase of money he gets a GoFundMe and makes $50,000. Remember that bus lady who all the kids were making fun of and then she somehow got 6 figures out of it? I guess that’s a little different, but it’s the power of social media. I guess it’s just nice when someone who could be your neighbor, who does things like laugh hysterically about a mask, gets a break in life. It’s the little things.

Southeastern University is anchored by Spirit-empowered education in a Christ-centered, student-focused learning community. Southeastern’s global impact is marked by a deep commitment to transforming minds and engaging culture through the integration of faith, learning and service. Each student’s divine design is nurtured and unleashed through the investment of faculty and staff, relationships within the community, the rigor of scholarship, diverse learning experiences and the discipline of spiritual formation, which propels students into a lifetime of serving the world in the Spirit of Christ.

As a Christ-follower and member of the community of Southeastern University, I will:

? Refrain from the possession, use or distribution of beverage alcohol (except for communion), marijuana, or other intoxicants either on or off university premises

? Refrain from the possession, use or distribution of tobacco products either on or off university premises

? Refrain from the possession, use or distribution of illegal substances and the abuse or illegal use of legal substances, including prescription and over-the-counter medications either on or off university premises

? Refrain from all sexually immoral behavior including: premarital sex; adultery; lesbian, gay, bisexual, or transgender behavior; and involvement with pornography in any form. (Biblical marriage consists only of a faithful, heterosexual union between one genetic male and one genetic female, and biblical marriage is the only legitimate and acceptable context for a sexual relationship)