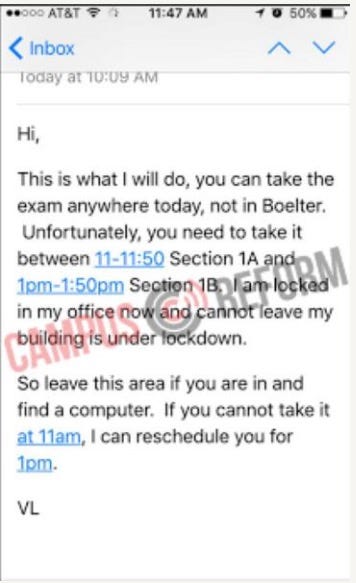 Campus Reform – A professor at the University of California, Los Angeles asked her students to leave cover during a lockdown Wednesday and expose themselves to an active shooter situation in order to complete a final exam.

“This is what I will do, you can take the exam anywhere today, not in Boelter,” Professor Vivian Lew wrote to her students in an email obtained by Campus Reform. “Unfortunately, you need to take it between 11-11:50 Section 1A and 1 pm-1:50pm Section 1B.”

Meanwhile, thousands of terrified UCLA students were forced to take shelter in buildings while local authorities searched the campus for an active shooter, putting the school on lockdown for over two hours and prompting a massive police response.

Professor Lew even informed her students that she could not make it to the exam herself because her building was on lockdown.

“I am locked in my office now and cannot leave[;] my building is under lockdown,” she wrote.

Nonetheless, Lew encouraged her students to leave safety so that they could find a computer to complete their exams remotely.

“So leave this area if you are in [it] and find a computer. If you cannot take it at 11 am, I can reschedule you for 1 pm,” she ordered.

Hell yeah Professor Lew. Welcome to the real world, kiddos. All this talk about “safe spaces” for all these precious little snowflakes, well here’s a rude awakening – ain’t no safe spaces out here, not for words, not for opinions and not for live bullets fired from the rifle of a school shooter. You got an exam scheduled, you take that exam. Think your boss would let you miss work for flying bullets on the street?

About two hours later, after the first section of the exam was already over, Lew wrote to her students to inform them that the remainder had been cancelled because several students were “too stressed out” to complete the test after a murder-suicide occurred on their campus.

“Many of you are too stressed out to take it and I cannot reschedule it. So no exam today,” she wrote, adding that those who did complete the first portion would be allowed to either drop the grade or use it to improve a lower grade on an exam given last Friday.

Lew concludes her follow-up email with an awkward attempt at supportiveness, reminding her students that their families love them and suggesting they brag about completing half of their final.

“Have a good day, remember, your families love you (even if you don’t feel it sometimes) and are probably worried sick about you,” she writes. “Let them know you are OK and that you finished 50% of your stats final 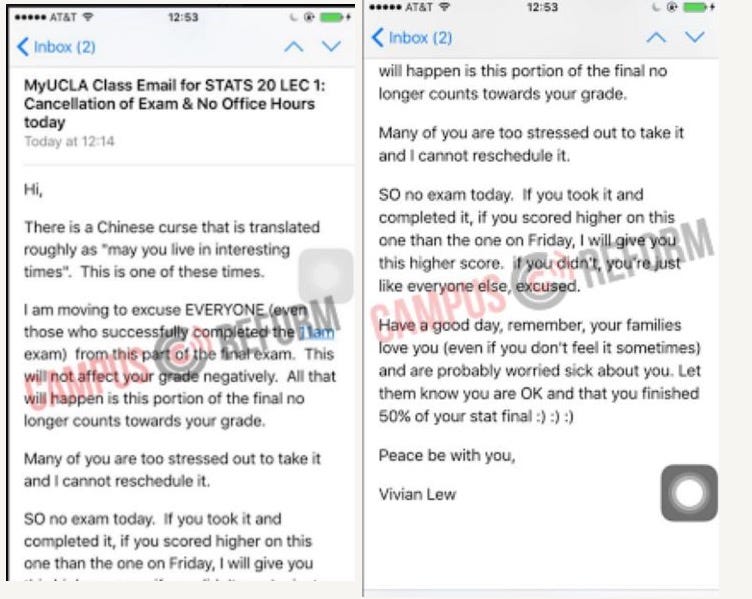 Ugh. Too stressed out. From what, a murder-suicide? The brutal killing of a beloved teacher, a young father of 2? That caused them to miss your SUPER IMPORTANT Stats test??

Lew told Campus Reform she did not have enough information at the time to make an informed decision, insisting that she did not know there were any buildings on lockdown.

“When I wrote the first e-mail, I was not operating with good information. I wasn’t aware at the time that some buildings had been locked down, my information was there was ‘police activity,’” she claimed, despite noting in her original email to students that her building was in fact on lockdown.

Lew went on to explain that she was in a meeting at the time and thought the police activity was only a rumor.

“I was in a meeting with two students at that time and I didn’t fully realize what was going on. I had read that it was a rumor,” she remarked, before saying she has “never encountered a situation like this before.

“I am thinking it was a ‘teachable moment’ for me. I’ve never encountered a situation like this before, I don’t recall receiving any training about a shooter or a lockdown when we are not inside a classroom and I didn’t have good information about the severity of the situation,” she said. “I did not react in a wise way and now I am paying the penalty.”

Note to professors – your stupid ass finals are not more important than student safety. I don’t care if there are false alarms and drills being run 8 times a day every day for a year, if an announcement goes out that the school is on lockdown, table your fucking exam for a little bit instead of telling kids to dodge bullets in order to make it to a computer lab.