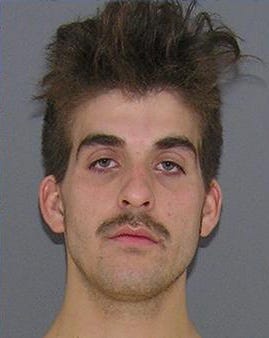 MAY 31--A judge yesterday ordered an Ohio man to stay away from the Kroger store where he allegedly stripped naked and defecated on a self-checkout scanner. Colin Murphy, 23, was arrested early Sunday following a repulsive incident inside the Kroger market in the Hyde Park neighborhood of Cincinnati (where Murphy lives). According to criminal complaints, Murphy entered the Kroger and “stripped naked in front of” a male employee. The suspect, police noted, smelled of alcohol, had slurred speech, and staggered as he walked. After disrobing, Murphy“defecated on U-Scan it,”investigators allege. Seen above, Murphy, who lives less than two miles from the Kroger, was arrested on disorderly conduct and public indecency charges. During a court appearance Monday, a judge set Murphy’s bail at $2000 and barred him from returning to the soiled Kroger.

Quite simply put, its one of the most disrespectful moves I’ve ever heard of. Pooping on the U-Scan It. That thing was designed to streamline the whole check out process. Keep things moving. Expedite the process. Speed. Save time. And here you are shitting up the works. Pooping on the self scanner. Just of all the asinine, unreasonable ways to be a dickhead, shitting at the self checkout at the grocery store has gotta be the top of the list.