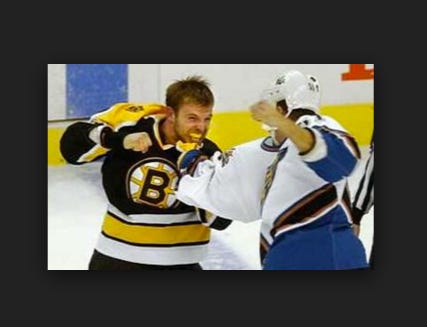 I couldn’t not share this article from the NYT about former Caps enforcer Stephen Peat. A fan favorite because of his willingness to drop the mitts with the biggest fighters of his time, Peat’s life has spiraled out of control since his NHL career ended, resulting in headaches, memory loss, reckless behavior, and addiction. He has every symptom of CTE, and is on the same path of many other hockey enforcers who died before the age of 50 such as Bob Probert, Derek Boogaard, and Wade Belak. 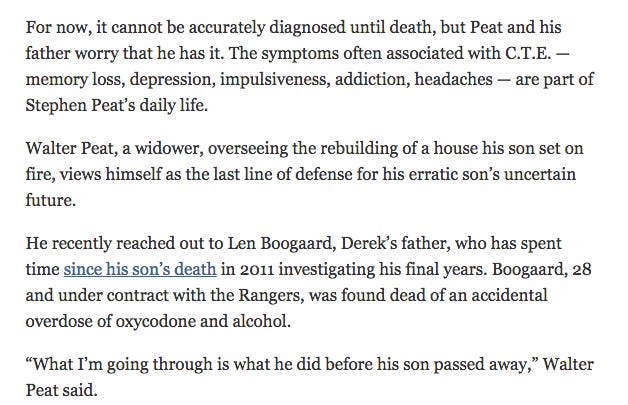 How sick is it that they know Peat is on this path to death and can’t really do anything about it? And the thing is, the NHL knows this is a problem. They have a big problem with this. They should be giving guys like Stephen unlimited recourses to get back on track, not a few months:

Peat said that he was prescribed Percocet routinely by team doctors in the N.H.L., and spent years after he left the game “self-medicating” with prescription painkillers that he got from doctors or bought off the street. He admitted to cocaine use, too, and still consumes alcohol. He believes that his primary problem is not addiction, but pain.

After the deaths of Boogaard, Belak and Rypien, followed closely by the death of his mother to liver failure after years of cancer, Peat said he contacted the N.H.L. Players’ Association.

It’s made me really reconsider my thoughts on fighting in the NHL. For the longest time I’ve always been on the side of “it’s part of the game”. I’ve always thought that you need an enforcer to stand up for your teammates, for the star players, to keep balance on the ice. But why? Isn’t that what the refs are for? What other sport do you need guys throwing haymakers at each other’s skulls? And just to keep a spot in the league? I used to side on “a fighter is a skilled player, just a different type of skill”, but now I’m not so sure. Is it worth it? Is playing 4 minutes a game and spending 10 minutes in the penalty box worth the long-term brain damage? I’m going to say no. It’s tough to sit here and say “the NHL should ban fighting” though. Like, it’s so hard to take that stand because I know what fighting means to the players and the teams. A well-timed scrap can change the game. I’m just wondering if it’s worth it. And again, I’m leaning towards no.

And it’s not to discredit fighters at all. It is a valiant job in the NHL. These guys take punches for their teammates. But like, spend an hour or two with an NHL guy. Nicest guys on Earth. You don’t want any of them having daily headaches and dying before the age of 50, and that looks to be more of the rule than the exception for career fighters.

The NHL will likely face a big time lawsuit like the NFL just went through:

The Peats are closely tracking the class-action lawsuit against the N.H.L. brought by players saying that the league concealed information about the dangers of concussions.

“Right now it seems like a battle we are losing, but I will spend the rest of my life standing up for my son, as I believe he is a good young man, who needs help,” Walter Peat wrote in an email. “Very sad that he has to resort to painkillers, alcohol and whatever means he can find to deal with his pain.”

More than anything, he misses “that twinkle and smile,” Walter Peat said in another message. “He looks fine, but who can say what is going on in a brain-damaged head?”

The NHL has done a lot to take fighting out of the game. It’s such a great game without it that I’m not sure it really matters if we never see a fight again. They can’t change the past, but they can protect the players of the future, and after reading this Stephen Peat article, I think they have to.

Love this guy. Fucking love him.