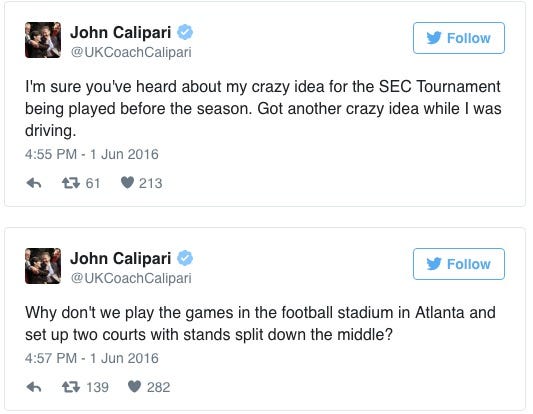 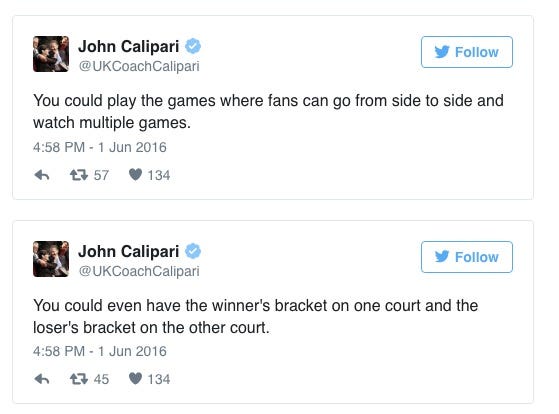 I’m in. Let’s get nuts and have the SEC Tournament in the preseason with multiple games going on at the same time. That’s how you draw attention and keep the word basketball being mentioned at the SEC Meetings.

In case you skipped over the tweets above, Coach Cal had a brilliant (term used loosely but in his eyes it is) idea of playing the SEC Tournament before the season. The reason for this is simple if you’ve followed Cal. He hates how the conference tournaments are supposed to play a role in seeding yet doesn’t seem to matter when it comes to Selection Sunday. Especially as it didn’t help Kentucky last season getting a No. 4 seed while Texas A&M got a No. 3, thus making the SEC Championship game worthless.

Oh, on top of that he wants to play it AAU style at the Georgia Dome. This is obviously all part of Cal’s plan to keep his name in the news and to keep basketball talk alive at SEC meetings, where people only care about football. While the preseason tournament idea is stupid, I actually love this idea for an early season tournament. Obviously you can’t do this for the SEC Tournament, but why not have the Sweet 16 teams from the year prior play this at Jerry’s World over the course of 4 days. It can be the new Maui Invitational or Battle 4 Atlantis.

Now the obvious problem – as anyone who played AAU hoops knows – is figuring out what whistle is yours and to watch for loose balls bouncing over to your court. Luckily Jerry’s World is big enough to truly separate the courts and give fans a chance to watch all the games. Hell, split the massive screen into picture in picture so people can watch up there.

(Note: No, I didn’t smoke the same thing Calipari may have when he fired off these tweets).

It didn’t stop there for Calipari though as he took one more jab at the NCAA and I’m all for shitting over the NCAA. You have to lock them up for committing a crime like this.