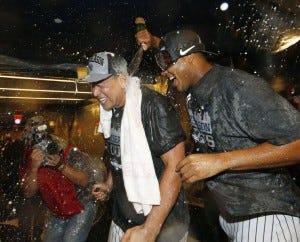 Post – His nickname may be “Super” but Ivan Nova is anything but, a Westchester landlord charges in a new lawsuit against the Yankees pitcher.

Landlord Jose Rodriguez claims the veteran righty — who has been with the team since 2010 — and his wife Jasmine trashed the White Plains house they rented at 124 Sherman Ave., constantly throwing raging parties that ruined furnishings and appliances and also left behind a “rampant cockroach infestation.”

The landlord said that as a “lifelong Yankees fan,” he was initially “honored” to rent to Nova, 29, and his wife.

The landlord is just going to have to wear this one. I mean I get it that his house may have been trashed and he says he can’t rent it out now but what do you expect when you rent to an athlete? Did you think the guy that grew up sharing a bed with four siblings in the Dominican Republic was going to show restraint when he got his own place?

We’ve seen this with other athletes like the guy Dave has never met, Johnny Football, with landlords crying after athletes throw parties and trash stuff like that’s not exactly what should be expected. Athletes have a weird childhood where they’re either poor or overworked by possessive parents, so once they have some freedom they break the stuff they couldn’t when they were younger. Honestly this guy is lucky the house is even standing after a bunch of Dominican parties in Westchester, or that the party even stopped.

To this guy, he lost $75k in damages and lost rent but in reality he probably owes Nova. This “lifelong Yankees fan” probably told everyone he saw that Ivan Nova was his tenant and felt like a million bucks each and every time. Probably promised people that they could stop by sometime and meet him too. To get that kind of satisfaction is worth way more than $75k in the moment to some average Joe. If anything, one invite to a party would have killed this whole thing but the landlord probably got the Waynes World 2 treatment and that’s why this is a big deal.