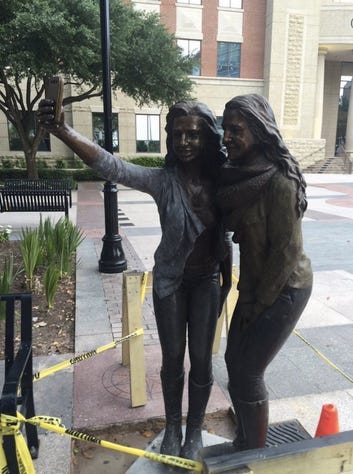 SUGAR LAND, Texas - Sugar Land recently installed two sculptures in the Town Square’s public plaza, but instead of enjoying them, people are criticizing the city for one of the statues. According to a city of Sugar Land press release, the statues are part of a 10-piece collection donated by a Sugar Land resident to the city through its Sugar Land Legacy Foundation.

I’ve had to look up about 15 sources on this because I simply didn’t believe it was true, but it is. This is a real statue. It wasn’t even the statue itself that surprised me because that makes sense, that’s really all we’ve got to show for our generation: others had founding fathers and war heroes, we got really good at taking pictures of ourselves. But the part that made me think it was fake was the fact that it’s just SO basic. That couldn’t possibly be a more stereotypical picture of two white girls taking a selfie. Flowing shirt, sorority squat, infinity scarf, skinny jeans, Hunter boots, everything about that statue is quintessential white girl. If you just added a Starbucks cup with the wrong name and a speech bubble saying something to the effect of, “Hahahaha oh my god can you BELIEVE they think my name is Rebecca! It’s Rebekah! This is the funniest thing EVER,” then it would be flawless. So say what you will about the idea, but this is all we’ve got to show for our existence and the artist knocked it out of the park.