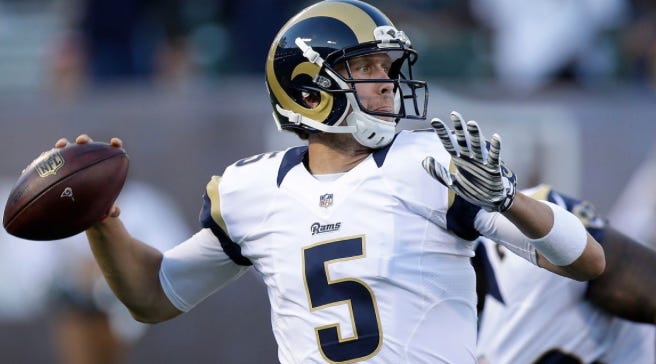 OXNARD, Calif. — The selection of quarterback Jared Goff in this year’s draft may not have made everyone happy in the Rams organization.

Veteran quarterback Nick Foles, a regular when offseason workouts began April 18, has not participated in a team-run training session since the Rams took Goff first overall. The fifth-year pro even skipped the start of organized team activities on Tuesday, and multiple sources told ESPN.com it is because the Rams drafted a quarterback.

After being acquired last offseason in the trade that sent Sam Bradford to the Eagles, Foles signed a two-year, $24.5 million extension that included nearly $13.8 million in guarantees. He started the first nine games but was benched for Case Keenum after throwing only seven touchdowns with six interceptions and five fumbles during a 4-5 start.

Foles received a $6 million roster bonus in March and has a guaranteed base salary of $1.75 million this season. He cannot be fined for his absences because the workouts are voluntary.

What do you do when you’re coming off a scorching hot season where you threw 7 touchdowns and 10 interceptions to the tune of a 69 quarterback rating? SKIP VOLUNTARY WORKOUTS! Good for you Nick Foles. I mean it was one thing when Sam Bradford threatened it, that was crazy and illogical, but Nick Foles? Nick Foles kind of sort of holding out is downright insanity. Nick Foles didn’t even get the starting job when they fake awarded it to Case Keenum before the draft.

Think about that. The Rams gave the job to Case Keenum over Nick Foles then drafted the Quarterback of the future in Jared Goff. You aren’t even QB2, Nick. You’re not even going to dress on gameday if they keep you on the roster, and you’re out here holding out and skipping OTA’s? What happened to the good old days when shitty quarterbacks took their guaranteed money and didn’t make a peep. I miss Matt Flynn, say what you will about all the money he took from the NFL but don’t say he wasn’t keenly aware of his lack of actual quarterbacking abilities. Somewhere along the way someone told Nick Foles he was a quality NFL starter and that person should be put in jail for lying at the greatest level.