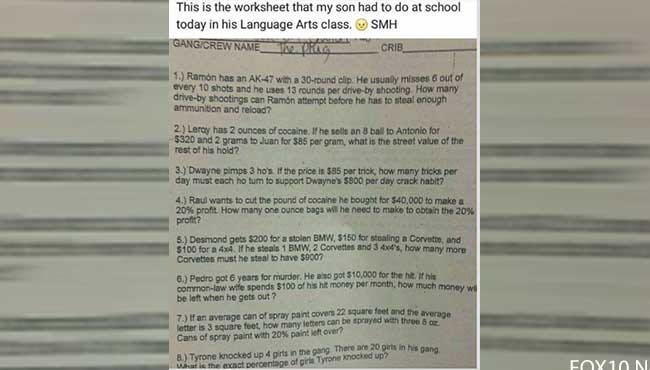 FOX 10- A Burns Middle school teacher has been placed on administrative leave over a controversial test given to some 8th grade students. Some parents say the test includes questionable language and subject matter that just doesn’t belong in the classroom. The parents say they can’t believe it was actually given to students. It’s a 10-question math quiz that highlights prostitution, drugs, and drive-by shootings. While some of the kids thought it was kind of funny, their parents aren’t laughing.

“My son, he took a picture of it in class and he texted it to me. I couldn’t believe it,” Erica Hall said. Hall said her son sent her a text photo of the quiz his eighth-grade language arts teacher passed out Friday. Hall said even the kids thought it was some kind of joke. “They took it as a joke, and she told them that it wasn’t it a joke, and they had to complete it, and turn it in,” Hall said. Erica Hall and her husband headed to the school Tuesday for some answers.

After outlining the math for a problem involving an AK-47, question 1 on the quiz asks: “How many drive-by shootings can Ramon attempt before he has to steal enough ammunition and reload?” Question 2: “Leroy has 2 ounces of cocaine. If he sells an 8 ball to Antonio for $320 and 2 grams to Juan for $85 per gram, what is the street value of the rest of his hold?” Question 8 reads: “Tyrone knocked up 4 girls in the gang. There are 20 girls in his gang. What is the exact percentage of girls Tyrone knocked up?”

We have an education crisis going on in this country and THIS is the stuff parents are going to complain about? I’ve taken a look at what common core math is and it caused my brain to shutdown like it was my first black out. Just numbers criss crossing and making no sense at all. The secret to getting kids to pay attention and learn in school is to make the subject matter interesting. Because you can go to class with three Red Bulls coursing through your veins, but for some reason the minute you sit down in class, those eyelids immediately get reeeeeal heavy. So shout out to this teacher for trying to find a way to reach the kids like Mr. Prezbo from The Wire. He was teaching probability through dice games, this teacher was teaching basic math through drive-by hypotheticals, slinging coke, and girls getting knocked up in a gang. Beats the hell out of two people heading to places on different trains.