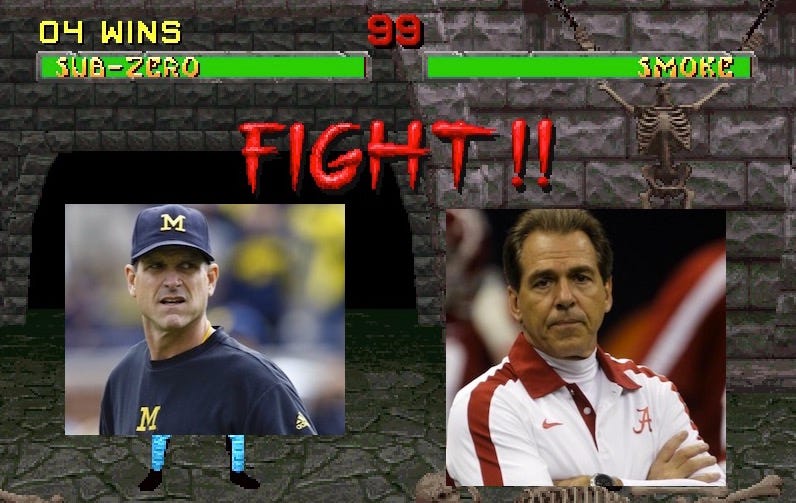 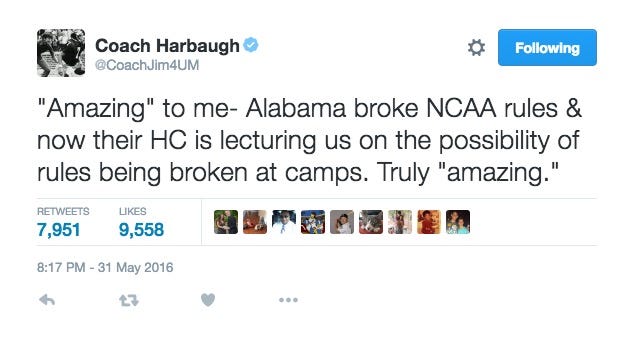 Satellite camps baby! Satellite camps! Also known as, those things you’ve heard wayyyyy too much about, because it’s college football off season and there is literally nothing else to talk about besides player arrests and coaching changes. Seriously I can’t think of another example of something that has had SO much written about it inversely proportional to how important it actually is.

Anyway here’s a real good long breakdown of what satellite camps actually are from the guys at USA Today.

What you need to know – Jim Harbaugh is a big fan of them. Nick Saban is not.

Alabama coach Nick Saban made one thing crystal clear Tuesday at the SEC spring meetings: He is not a fan of satellite camps.

After initially saying he would not discuss satellite camps, Saban went off in a five-minute rant that would have made Howard Beale proud, comparing the satellite camps to “the wild, wild West.”

“Until this satellite camp issue came up, you still had to go to the high school, go through the coach, and players came to your camp if they were interested in learning,” Saban said. “By doing what we’re doing now, we’re doing what we do in every other sport that we’re complaining about every day — AAU basketball and all this.

“Someone sponsors the camp, they pay them the money. What do they do with the money? And who makes sure the kid paid to go to camp?

“This is the wild, wild West at its best. There have been no specific guidelines relative to how we’re managing control of this stuff. It’s happening outside the normal evaluation window, which means we’re taking time away from our players. We have to worry about our players doing the right things with the limited time we have them, but we’re not going to do that because we have to be somewhere else to see someone else.”

Saban has never been a fan of satellite camps, characterizing them as “ridiculous.”

“All the people that say this is creating opportunities for kids, this is all about recruiting,” Saban said. “That’s what it’s about.

“Why should we be promoting anybody else’s camp anywhere? All we’re doing is allowing all these other people that we spend all of our time at the NCAA saying you can’t recruit through a third-party person, and that’s exactly what you’re doing.

“Creating all these third parties. And who gets exposed on that? I go to a camp and talk to some guy I don’t know from Adam’s house cat, and he’s representing some kid cause he’s putting a camp on, and then I’m in trouble for talking to this guy.” [ESPN]

And then there was this gem:

“I don’t know how much it benefits anybody because all the people that say this is creating opportunities for kids, this is all about recruiting,” he said. “That’s what it’s about. Anybody that tells you that. What’s amazing to me is somebody didn’t stand up and say here’s going to be the unintended consequences of what you all are doing.” [FTW]

OH BOY Jim Harbaugh did not like that one! 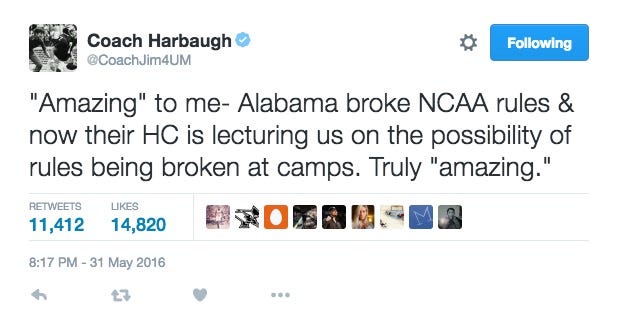 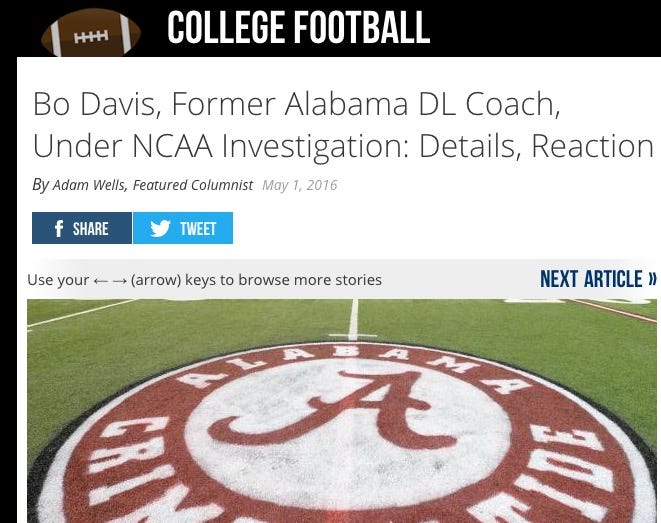 And there you have it. Jim Harbaugh with the direct shot at Nick Saban. The opening shot of what promises to be a full scale war. Evoking Bo Davis and NCAA rules violations and using the sarcastic quotation marks…IT’S ON!