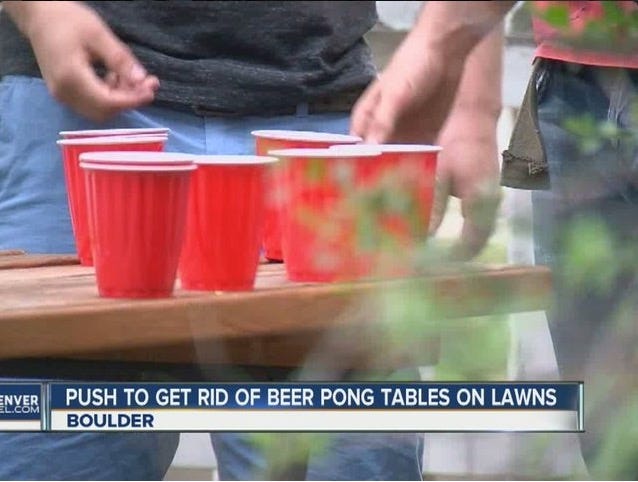 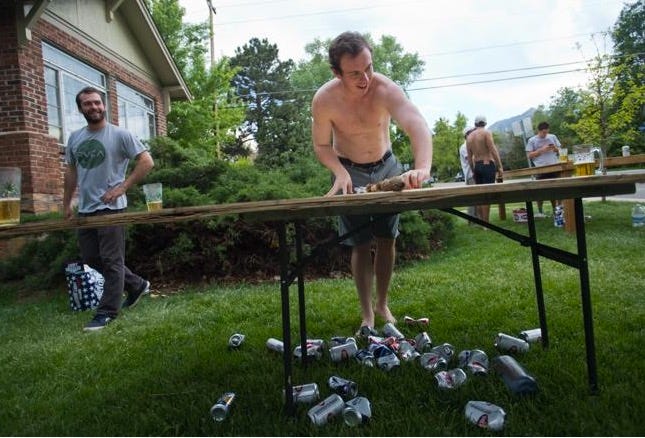 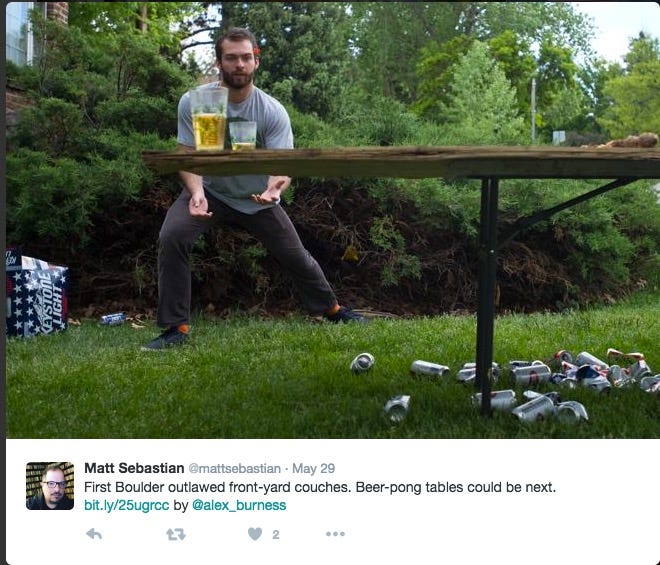 If you live in a certain part of town, chances are you pass by them often. And if you’re at a certain point in life, their mere visage may evoke a keen sense of longing for a simpler time, when love was new, exams were over and Beta was hosting a tailgate at noon.

They may be filthy, but, like raccoons, they are your neighbors whether you like it or not.

They are the front-yard beer pong tables of University Hill. And it might just be time for them to go inside.

At least, that’s the thought being pitched by City Councilman and Hill resident Andrew Shoemaker.

“You drive through the Hill in the spring or the fall, you see them. You see them laying out all winter,” the councilman said in an interview Thursday. “What I’m talking about is getting these things out of the yard.”

It might look a lot like the existing city ordinance that has since 2002 informed couch governance on the Hill. Get caught with a couch or another piece of upholstered furniture outside your home, as 65 Boulderites were in 2015, and you’re staring down a $100 first-time fine.

It’s a seed of an idea for now, and it may never see daylight, but Shoemaker wonders if perhaps a similar rule is in order for neglectful pong table stewards. He says he plans to gauge the interest of his eight council colleagues in pursuing such a measure.

Santa Clara, Calif., bans unattended outdoor beer pong tables, and violators can face $750 fines. The College of William and Mary banned beer pong altogether six years ago, and at least a dozen other campuses have done the same.

“We do receive calls about it from the public, but we tell them that just a table in and of itself is not something we can enforce under the furniture ordinance because it’s not upholstered,” Riley said.

Councilman. That’s like one step above the person that answers phones right? Not too up on my political rankings but I’m pretty sure councilman isn’t very high on the list. Gotta make a name for yourself somehow right? Best move is to pick the biggest issue on the table and go straight for its jugular. It’s a textbook politician move. Schneiderman did it in NY by deciding to crusade against daily fantasy sports. Councilman Shoemaker is doing it by trying to ban beer pong tables from the yards of Boulder college students. Clean up the city. Make Boulder Yards Great Again. Interesting hill to plant your flag on, yet here we are.

I guess in a way it’s kind of good news for Boulder that the biggest problem the city faces is kids playing beer pong outside of their homes? Apparently crime is cleaned up, the homeless are all taken care of, the roads are perfect, infrastructure all up to date. Time to focus on the real issues at hand, like beer pong. To quote Neighbors 2 which I saw in theaters yesterday, time to do what old people do best, stop young people from having fun.

Guys, can you fold your tables up and stick them in the hallway overnight or something? Or at least toss it in the backyard? I mean you’re crushing your neighbor’s property value here. Although, counterpoint, if you live in a college neighborhood lined with frat houses and that rents to students – you kind of need to expect not finding perfectly manicured lawns up and down the block. You got a deal on the house for a reason.