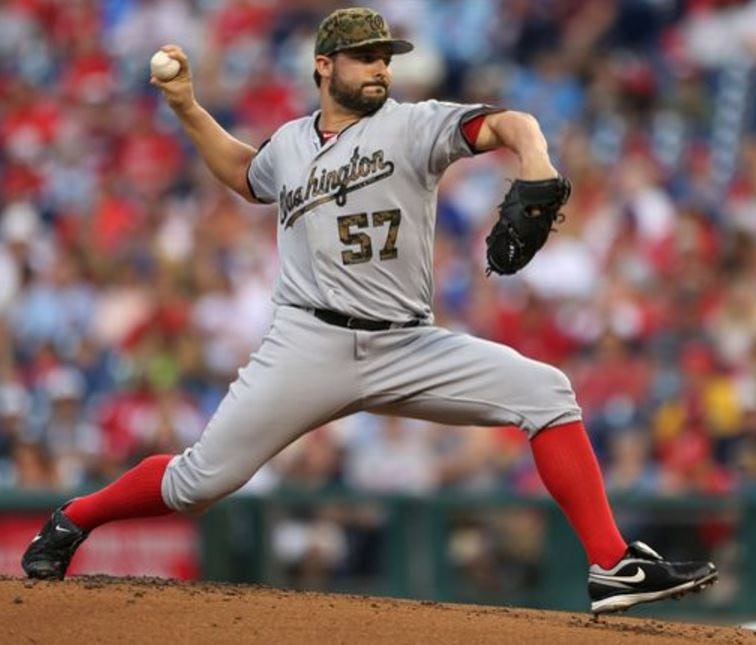 After holding on against a small Phillies rally yesterday in Tanner Roark’s 4th win of the season and trouncing the Cards 10-2 the day before, the Nats finished out Memorial Day Weekend with an even 2-2 record and a 1 game hold on the division lead.

On Sunday, Stephen Strasburg pitched another gem, his 4th straight quality start, and remains undefeated on the season and tied for the MLB lead in wins with Chris Sale and Jake Arrieta. In all 9 of Strasburg’s quality starts in 2016, the Nationals have wound up winning the game while in the 2 games where he allowed more than 3 runs (pretty good games in and of themselves: 7 innings, 4 runs, 11 Ks and 7.1 innings, 4 runs, 10 Ks), he did not get the individual win though the Nationals did come back to win. In short, when Stephen Strasburg is on the mound, the Nationals are undefeated at 11-0. Stephen Strasburg is an ace pitcher and he is still only 27 years old (3 years younger than Jake Arrieta and the same age as guys like Chris Sale or Jacob deGrom).

Offensively, Jayson Werth’s pinch-hit grandslam to dead center was a real sight to behold and there was no chance of it being reviewed like Anthony Rendon’s homer earlier in the inning that just eked over the scoreboard in right. Rendon’s hot streak has continued for 3 weeks now. Since the 10th of May, he’s been batting .358/.456/.567 with 2 homers (each of them in the past week) and a bunch of walks. Wilson Ramos should probably start scouring the web and checking out MatrixFlights.com for a ticket to San Diego during the All Star Break. Ramos is having a terrific year and the combination of his previously-dormant talent, his LASIK eye surgery, and his good health this season lead me to believe that it is pretty legit.

Tanner Roark continued to impress and has been incredible this season aside from one pretty rough outing. Roark brought his ERA down to 2.70 which actually ranks 20th best in all of baseball. That’s right, our #5 starter has a top 20 ERA in all of the league. On the offensive side of the ball it was certainly a slower day than Sunday was but Daniel Murphy got it done and that’s all we can really ask for. Murphy was a triple shy of the cycle (the guy batting right behind him, Ryan Zimmerman, actually hit his first triple of the season), had 60% of the team’s hits, and knocked in 3 of the 4 runs. Murphy is absolutely incredible and his .395 average is .044 better than Boston’s Xander Bogaerts who has the second highest batting average in all of baseball.

These Nats just continue chugging and with Trea Turner likely being called up later on in this week, the good times should keep rolling.