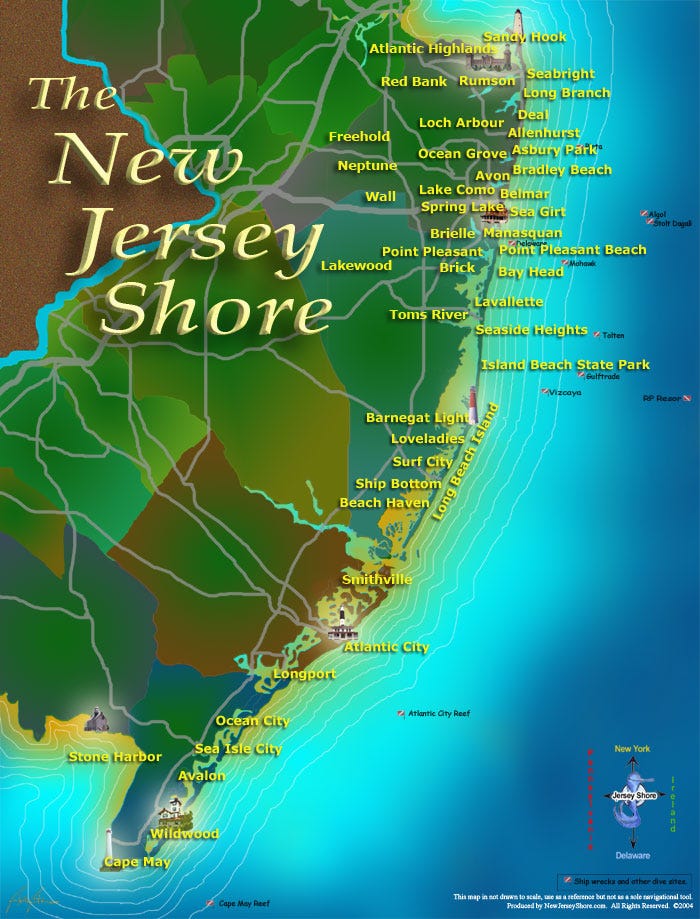 Memorial Day baby! The best damn weekend of the year. The official start of the summer and the first sign that eating fries with every meal during the winter would indeed catch up with you. If you are from the Philly/South Jersey area, this weekend comes with the all-too-familiar trek on the AC Expressway and the Garden State Parkway to the Jersey Shore. Let’s break them all down.

If you are here on Memorial Day weekend you are probably from Delco, celebrating your 21st birthday at the Trop like it’s the fucking Hangover IIII then partying at that stupid club that has the pool in the middle of it that has to be filled to the brim with Chlamydia. Or you’re over the age of 65 and are too damn old to be out in the heat.

Not a real shore town. Just old doctors or lawyers (if you catch my drift [Editor’s Note: Jews. He means Jews.]) that rather sit at their pools behind their brick homes instead of the beach.

This one wins all the awards and it should. It is probably the cleanest and most family-friendly one. The boardwalk is absolute best. From the two theme parks (looking at you Double Shot) to the Kohr’s ice cream on every corner.This is the shore you want to go to if you have little annoying kids, tons of money, and have good parents to watch your kids for you while you sneak out to May’s Landing with the lady for drinks.

The spot to be if you are 21-25. It is literally just a giant cluster-fuck of drunk or hungover 20-year olds from Memorial Day Weekend to Labor day. Just ask Jordie and Smitty.

This is where you real separate the high-class from the low-class. Avalon is the spot to be if you are 25-34 and don’t have a wife or kids yet. The Princeton is always a consistent spot the whole entire summer and Smitty claims the Pirate Island mini golf course his home during the summer months (We had our first business meeting there. No joke). Fun fact: If you ever see a couple walking together in Avalon it’s because they are still trying to have kids and the wife’s parents gave them their place for the weekend for a “romantic getaway.” Stone Harbor has some A-plus shop, roof-top mini golf, and ice cream which is good for about two trips a year for a big night out with the family.

The most beautiful hell hole the world has ever seen. You can sit on a bench at the Wildwood boardwalk and see things that are truly unbelievable. Every single race, gender, and ethnicity acting in a variety of ways that would make you truly cringe. Everyone is constantly just eating the grossest fried “treats” as kids run from one gross Morey’s Pier to the next.

My aunt and grandma took me to one of Morey’s waterpark for my birthday when I was like 13 and I still think the smell haunts me to this day. Walking barefoot around that water park, bandaids floating in the water and all, can change a man.

However, Beach Creek right off of Rio Grande is my favorite spot down the shore. Great music, great drinks, and they have a gorgonzola gnocchi there good enough to make your Italian grandmother blush.