USA Today – Danny Doyle, a junior defensive end at Duke, was in a team meeting when his Duke coach David Cutcliffe received a phone call: From Doyle’s parents.

It turned out Cutcliffe had called them that morning to tell them what he was about to tell the whole team: Doyle, who had spent his first two years as a walk-on, was getting a scholarship.

There was the usual cheering and congratulations from Doyle’s teammates that comes in these videos. But at the end, Doyle’s mom really wins the day when just before Cutcliffe says farewell, she gets in two more words:

Wow, Duke did something cool that the internet liked*. Savor this moment Duke fans, internet acceptance is like a shooting star for you guys, got to soak it all in while it’s here. Duke football celebrating #GritWeek by giving some scrappy looking white boy walk-on D end a scholarship, and making it even better by having his dad call during a whole team meeting. Very cool. That’s a big get too – total year’s tuition + fees at Duke runs you just short of $70K (!!!). Now Danny Doyle and his family don’t owe a cent. 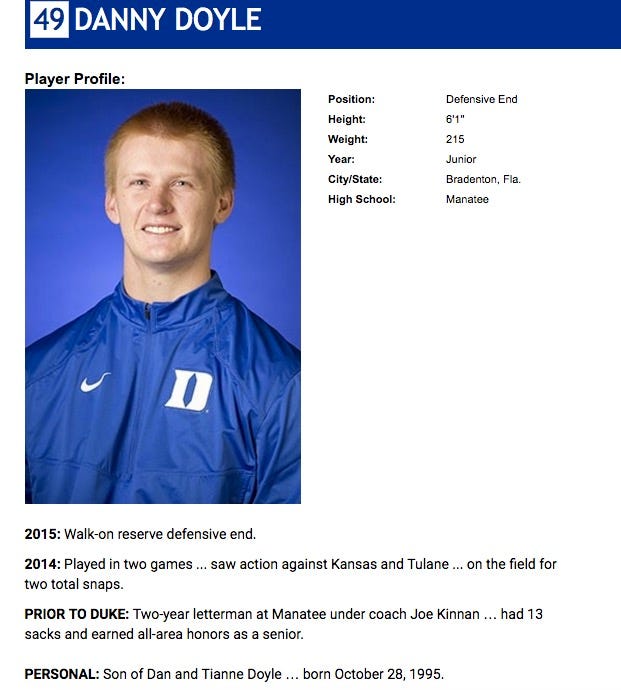 *Makes me feel a little uncomfortable to be honest. Needed Grayson Allen to come out and say you’ve been Punk’d, rip the scholarship paper in half then trip him or something. Level off the hate scale for people who don’t like change.