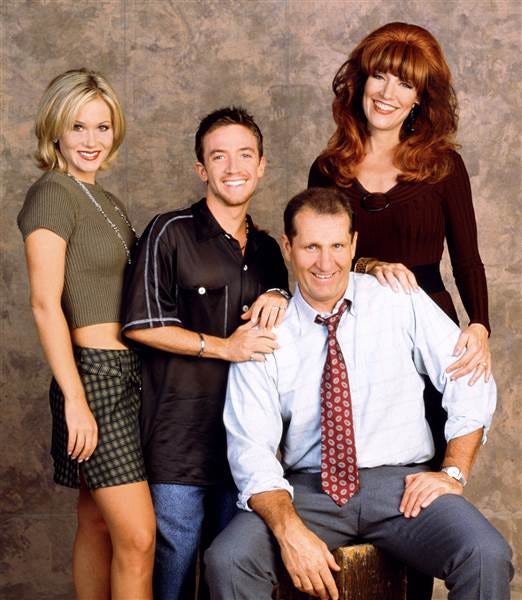 Source – On the Allegedly podcast with Theo Von & Matthew Cole Weiss this week, David Faustino revealed the status of the Married… spin-off. He says that while the entire cast is still on board and Sony is apparently “very excited” about it, one stupid hurdle stands in the way. There has been one issue, a legal issue, that they haven’t been able to get around at the moment that they’re still trying to work out, which we obviously hope they’ll work out, as do the fans. But if it does, you’ll see it and if they can’t figure it out, then you won’t.” Well that doesn’t sound too cautiously optimistic. Should Sony figure out this sole, mysterious legal issue, they’re already eyeing up a potential home for the spin-off.There’s a rumor that it could end up on Netflix, and I just think how fun Married With Children would be on Netflix because you could really have some fun then. You could tell Kelly to f–k off, a lot of fun things like that. But if all the stars align and we do see a Married… With Children spinoff sometime in the near future, Faustino explains why it might be different than the show we remember: “I think in ways it did push the envelope, but in ways, we’ve become less—some of the jokes we couldn’t get away with today. You could not get away with a lot of the s–t that they said. I think the things that would be different—like Kelly would be in a G-string. You can get away with stuff like that. But some of the jokes…I mean, all we did was rag on fat people and women.”

No fat or women jokes on Married With Children? BLASPHEMY. Buck is rolling in his grave. What the hell would this show consist of then? The failed sexcapades and rappings of a 45-year-old Grandmaster B? Married With Children was a crude, outlandish, yet great show. Anybody who lived during the decade of the ’90’s knows the likes of selling women’s shoes, Biggins, and No Ma’am. Scoring 4 touchdowns in one game seemed like folklore that was only attained by the greatest. Yeah, Al Bundy was a sexist, fat shaming, and misogynistic prick, but dammit, he’s a true American. A hardworking, blue collar man drudging through a life he hates while still living in his glory days. If you think about it he’s basically the most realistic American character possible. I agree, there is NO WAY in hell that Married With Children would be green lit to be a prime-time series today, but are you kidding me with the PC crap, Netflix? E tu, Brute? Make the show the way it was to spark a fire to this nostalgic wood. The sexism and the fuck you to political correction would never be tolerated in 2016, but that’s what made the show great. Al Bundy told it like it is because his life sucked and he couldn’t give a flying fuck unless you had a nice set of hooters or could help start up the Dodge when it died. Simple as that. The man needs to be appreciated.