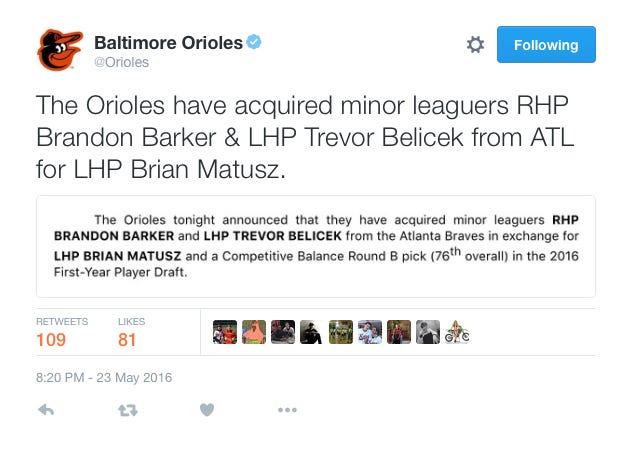 Weird trade we got here, as the O’s sent LHP Brian Matusz and a Competitive Balance Round B pick (76th overall) in this year’s draft to the Braves for righty Brandon Barker (will report to Bowie), and lefty Trevor Belicek. Both are minor league guys with upside. After acquiring him, the Braves designated Matusz for assignment.

So basically the O’s sold the remainder of Matusz’s $3.9 million contract and their Competitive Balance Round B pick for two minor league pitchers. Fine by me. Matusz had not been good this season, leaving Baltimore after posting a 12,00 ERA, 3 homers given up in 7 games, 7 walks, and a WHIP of 3.000.

Matusz was drafted fourth overall in 2008 out of San Diego, right in front of Buster Posey, and behind former O’s teammate Pedro Alvarez at #2. He was a highly touted prospect for the O’s, but never lived up to the hype. 2010 was the first year Matusz saw serious time on the bump, and went 10-12 with a 4.30 ERA on his way to finishing fifth in Rookie Of The Year. 2011 literally couldn’t have gone any worse, as he posted one of the worst pitching lines in MLB history, going 1-9 in 12 starts, with an ERA of 10.69. He was sent down to the minors, and started again for the Birds in 2012, going 6-10 with a 4.87 ERA. Talk about a guy just not cut out to be a starter, Matusz landed in the bullpen, and actually became a pretty good weapon for the Birds. 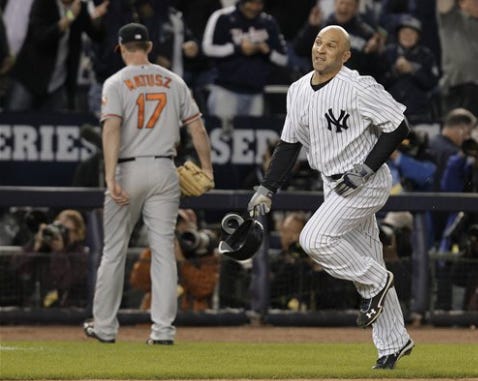 His splits show that he was much better as a reliever, with an ERA 2 full runs lower when coming out of in relief. Baltimore fans seemed to put up with him because of his ability to get David Ortiz out, Ortiz was 4-29 (.138) with 3 doubles, 1 BB, and 13 strikeouts against Matusz.  While we had those good memories with Matusz and Ortiz, all Orioles fans remember Raul Ibanez crushing the hanging breaking ball in the 2012 playoffs, and all the times we saw him come in this season looking terrible. This was a case where the guy needed a change of scenery, Buck knew he couldn’t keep throwing him out there. So just like Jake Arrieta, expect Matusz to get a job and win a Cy Young in 2018.

So long, Brian Matusz, I’ll miss you making Ortiz look like a fool, but this team is looking to win, and it doesn’t look like they could have continued to do that with you in the pen. In the meanwhile Ashur Tolliver was called up from Bowie. Tolliver is a lefty who has served his time in the minors. He has 18 appearances, including 2 saves this season with a 1-1 record and an ERA of 2.42, along with 25 Ks and only 8 walks in 26 innings this season. You may have seen him before….

After taking 2 of 3 in Anaheim, and winners of 8 of their last 12, the Orioles kick off 3 in Houston tonight. Wouldn’t mind building on first place with a sweep over the 17-28 Astros.