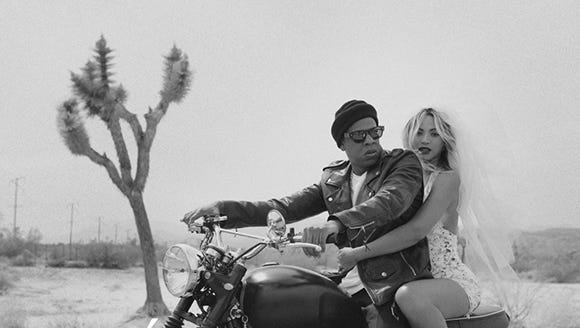 Page Six- Forget those rumors about Jay Z and Beyoncé’s marriage — after all the wild speculation set off by “Lemonade,” the power couple has secretly recorded an album together. Sources confirmed exclusively to Page Six that Jay and Bey’s surprise album is complete, and it will drop on his streaming service Tidal very soon. One source told us, “Jay and Beyoncé were never going to do an interview to address all the questions that came up after ‘Lemonade.’ It’s more their style to respond through music.”

Beyoncé’s album “Lemonade,” released on April 23, set off a torrent of rumors about the state of their marriage, because of the singer’s lyrics about a cheating spouse and her angry performance in the accompanying film. Countless column inches and Web posts were devoted to discussing the identity of “Becky with the good hair,” and both Rachel Roy and Rita Ora were forced to deny being Jay’s alleged other woman. Beyoncé and Jay haven’t made any public comments about it. It is not known how long the famous couple has been working on the new album, because Beyoncé is in the midst of her Formation World Tour.

Look at Jigga and Bey getting their Hans Gruber on and tricking the entire world all in the name of the almighty dollar. Sure Hans kidnapped a bunch of people and Jay/Bey aired what may or may not have been their dirty laundry. But in the end, it was all about that paper. Bravo to them both.

I think after Lemonade dropped and rumors of Jay-Z’s album came out, people thought this was all a money grab. If you didn’t use your Tidal free trial on The Life Of Pablo, you probably used it on Lemonade. So now if you want to hear Jay-Z’s side of the story, you are going to have to pay the man for that real deal Tidal subscription. Fucking genius.

And how about Beyonce appearing on the album instead of it just being a solo Jay project? Of course no woman is going to let her guy give his side of the story without chiming in. That’s Day 1 relationship stuff. Everyone got all offended when Kanye was beefing with Wiz on Twitter, which they spun to it being self-promotion for both of their albums. Two albums about what may or may not have been about Jay-Z cheating on Beyonce would be about the same as that. And to be honest, I don’t really give a shit as long as Jay-Z makes his first good album in a while.

PS: We can all agree that Jay-Z probably has sex with 100s of chicks per year. The reason you lift all those weights is to play in the NFL. And the reason you move all those albums is so you can bang 11s for the rest of your life, no matter how much you look like Joe Camel.