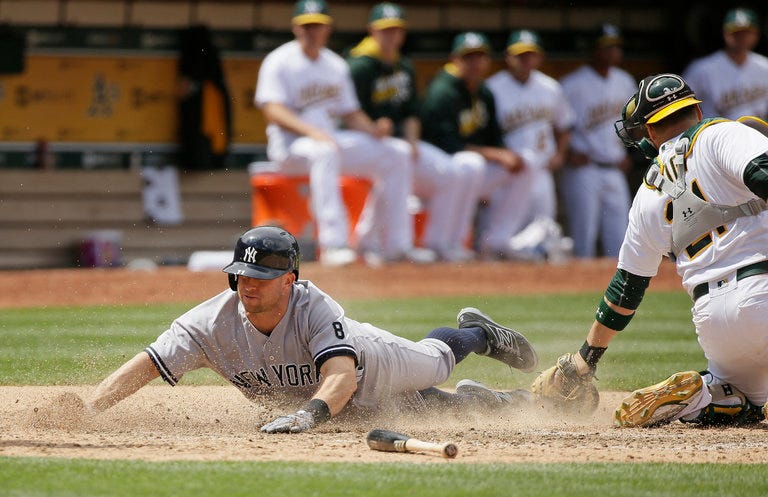 OAKLAND, Calif. — When Athletics catcher Stephen Vogt hit a tailing liner down the left-field line that bounced toward the wall for a double on Sunday afternoon, Yankees starter Michael Pineda followed the drill and ran to back up catcher Brian McCann.

As Jake Smolinski crossed the plate and Billy Burns followed him, giving Oakland the lead in the fifth inning, Pineda hopped up and down several times. While walking back to the mound, he shook his head and waved his hand in disgust.

The frustration was understandable, given how well Pineda had pitched to that point.

But unlike much of this season, one mistake — or even two — did not leave Pineda with a day’s regret.

The Yankees rallied to regain the lead on sixth-inning singles by Mark Teixeira and Starlin Castro, then hung on for a 5-4 victory over the Athletics at Oakland Coliseum.

The win, which completed a four-game sweep of Oakland, was the Yankees’ season-high fifth in a row and the 12th in their last 17 games, allowing them a chance to enjoy their day off on Monday — the only break in a stretch of 40 games.

Started the week in the basement of the AL East, losing 2 in a row to Arizona, but now we sit in 3rd place ready to pounce. The beginning of the season was TERRIBLE but I told you guys all along that eventually this team would come together and win a bunch of ball games. It was only a matter of time before the guys on this team woke up, because it was a statistical impossibility that they could play that bad all season.

If you look at how this team is winning games, it’s easy to say that the starting pitching is still questionable. Even when they’re giving up only 1 run in a start, we’re only getting 6 innings out of them. If things stay like that, we’ll eventually blow out the bullpen and have nothing left for the postseason push. These are great points but it’s not how things will stay. First of all, we won’t win every game by 3 or less and at times will even lose games. If someone has a bad start or the offense blows the doors off someone, we get to rest the big 3. You have to assume that one way or another you get 2 days of rest a week like that. Secondly, if we got the same starts in the upcoming week as we did last week, guys stay in games longer.

Being only 1 game under .500 some of the pressure is off Girardi to find wins. For the last week, every lead was so sacred that Joe had no choice but to pull Eovaldi at 85 pitches and Nova at 62. Our backs were against the wall and as a result no one aside from No Runs DMC could be trusted. With a ton of people calling for Girardi’s job and Hal speaking out, the smart move here was to keep the lead by pulling you starter early. Now though, Girardi can trust these guys to give him another inning or 2 and cut down on the amount that the back end of the pen needs to be used. As the calendar turns and the temperature goes up, these guys will get more comfortable and be able to gain the confidence they need to pitch up to their potential.

The biggest issue that I see coming up for the Yankees is the return of A-Rod. Everyone knows that I love Alex and appreciate him putting poison in his body to hit more home runs for us but he’s batting under .200 and in the 12 games that Carlos Beltran has played DH he’s batted .367 with 17 RBIs. Alex going down, opened up a lot of flexibility to move guys around and made us better defensively in right field. The regular playing time has benefited Hicks as well, who has hit .271 in his last 15 games after a terrible start to the year. All of this combines to make for an awkward situation if A-Rod doesn’t come back strong. On the season Alex is only batting .194 but in his last 7 games before getting injured he hit .304 with 3 home runs. Things were just starting to heat up and if he comes back cold, he may find himself on the bench since he can’t play the field.

We’ve got 4 straight series against division opponents coming up with a makeup day in Detroit mixed in, so if there was ever a time to stay hot, it’s right now. Baltimore and Boston are playing above their pay grade so if we can keep things moving while burying Toronto and Tampa, we’ll be in a solid position to make a run at the division as the guys ahead of us come back down to earth and have to play each other next week.