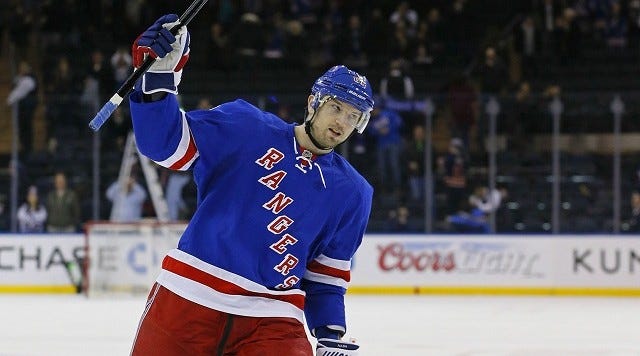 NBC Sports – Rick Nash could be on his way out of New York, according to Sportsnet’s Elliotte Friedman. On Saturday, Friedman brought up the possibility during his Headlines segment. “He has a 12-team list that he can be dealt to and there seems to be a little bit of smoke to this one,” explained Friedman. “I think they’ve been asked. I think they’d be willing to do it under the right circumstances. “However, there’s a couple things here. No. 1, he’s got a $7.8 million cap hit for two more seasons — how would that work? And No. 2 , while he struggled this year the Rangers really defended him. They felt that Nash played hurt and that affected his totals and I think they do look at it and say if he’s healthy next year he could be much more effective. But he’s going to be a name and the Rangers are going to be a team to watch.”

The Rangers potentially looking into moving Rick Nash shouldn’t surprise anyone. The soon-to-be 32 year-old winger is coming off his absolute worst season offensively after a career-high 42 goals in 14-15. Nash went from the focal point of the Rangers’ attack to a run-of-the-mill forward whose strength became his play in the defensive/neutral zones. With other contracts such as Girardi’s virtually unmovable (even without his no-move clause) deal clogging up the salary cap, Nash has enough of a resume for teams to take a chance on him being a complimentary “missing piece”. There’s plenty of reasons though why this trade probably won’t go down.

First, the Blueshirts brass still really like him. Injuries may very well be to blame for Nash’s downfall last season & they may feel he’s due to bounce back. So why sell low? In fairness, that could all be lip service to maintain as much value as possible. Also, with a potential expansion draft looming in 2017, the Rangers could get out from under the last year of his deal if they’re wrong about a rebound by leaving him unprotected. He’d undoubtedly get scooped up as the super star for the debut of the Vegas franchise.

More importantly, unless Jeff Gorton is able to find a trade partner on Nash’s 12-team list & is willing to ship #61 for just picks and prospects, how much money would a deal actually save? Assuming the salary cap climbs to an expected $74M the Rangers have $17M in available money. Let’s say they do the right thing by buying out Girardi & waiving Glass – that’ll give them $21.7M. It’s gonna take around $10M to keep RFA’s Kreider, Miller, Hayes & McIlrath. Figure $1.7M for a 7th defenseman & extra forward. That’s $10M left to fill 2 forward spots and a top-4 RH blueliner (UFA Jason Demers?).

All that seems reasonable, but that’s ONLY if they start by shedding Girardi & Glass. If that’s not gonna happen (the expansion draft might be a reason they hang onto Girardi one more year – long term, it’d be cheaper than a buyout) then we can stop projecting any sort of legitimate cap space. Especially if the Rangers are expecting to plug one hole on the roster with a Nash trade while opening another. For example, if a rumored Nash-for-Shattenkirk swap took place, any significant salary retained would essentially just shift this year’s search from a defender to a forward without making much room (although a defender is much more important for this squad). Plus, does a team with cap concerns want significant dead money on the books while in “win now” mode?

These are all things to consider before not only looking forward to a Nash trade but giving any credence to this lunacy:

With @FriedgeHNIC reporting that Rick Nash might be available this summer…This might put NYR in the Stamkos bidding war.

Let’s pump the brakes. There’s a ton of work the Rangers have to do just to maintain & tweak. Thinking they’re gonna go through such an enormous makeover necessary to accommodate a $10M/year contract is ridiculous. Not while in “win now” mode with Hank between the pipes. Clearing enough space only to lose a Stamkos bidding war is not an option. There’s some shakeups to be made for sure and Rick Nash may be involved – but Steven Stamkos isn’t coming to Broadway.