That was FANTASTIC. The look on his face when he did the math in his head and realized he was TWENTY FOUR pounds overweight. Absolutely perfect. Like a regular dude stepping on a scale after a long weekend of booze and pizza. I weight what??? Only instead of a regular schlub like all of us out there, this guy’s only job is to train and be in shape for a fight. I would love to have been a fly on the wall during training. Cake and wings, and pasta. Nah guys I’m cool, I know myself, I’m totally at the right weight, don’t even worry about it.

The moment he thought that maybe his bathing suit was what weighed 24 extra pounds. Can’t script it better. I do the same thing where I’ll weigh myself with clothes on and then say, well the clothes probably weigh at least 30 pounds right? 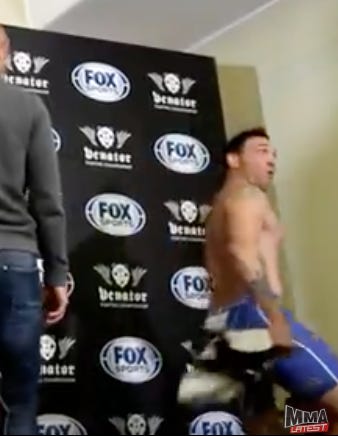