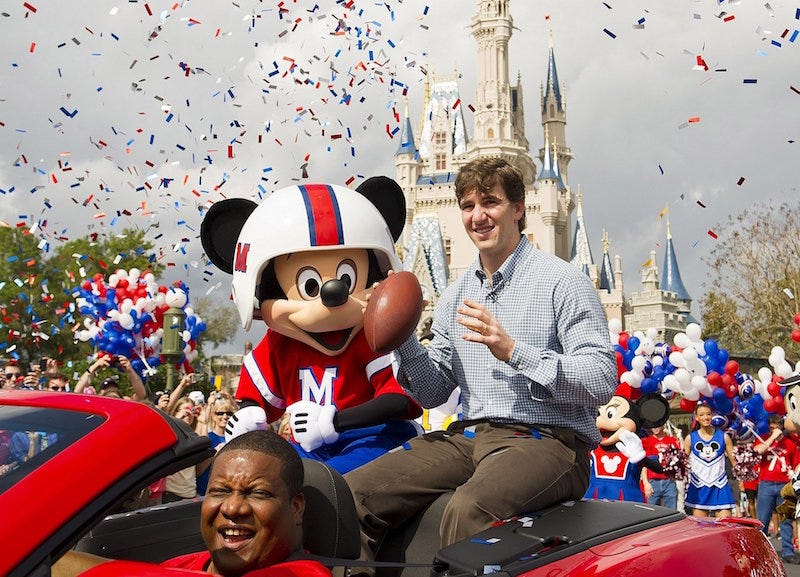 Bloomberg- The National Football League is moving its Pro Bowl to Orlando from Honolulu, which has hosted the all-star event every year but twice since 1979, three people familiar with the matter said. Orlando is among four cities bidding to host the game, joining Honolulu, Houston and Sydney, Australia, according to NFL spokesman Brian McCarthy, who declined to comment on the Florida city being selected. The people were granted anonymity because the NFL hasn’t announced the change. In Orlando, the game will be played at the Citrus Bowl, which underwent a $200 million renovation two years ago. Greg Creese, a spokesman for Florida Citrus Sports, which promotes local tourism, declined to comment.

The Pro Bowl is one of my guilty pleasures. I know it’s one step above a flag football scrimmage, but watching some of the best athletes in the universe play a meaningless football game is still better than most of the other options on a cold January night. Twitter jokes and a chance for someone to say/do something stupid always gets me excited. Not to mention that you never knew when some random highlight will live on in our minds forever. Namely Sean Taylor sending Brian Moorman to another planet.

But the biggest problem with the game (other than the whole “quality of play” thing) is that most of the superstars bail despite a free, all expense trip to Hawaii. And the number of no shows is going to skyrocket now that the game is in Orlando. Because you know who lives in Orlando? Florida man. Yes, the same Florida man who lives on this very website about 10 times a week. Florida man uses wife as mop over PB & J dispute. Florida man thinks he’s Rihanna. Florida man tracks down shark that bit him and eats it as revenge. Okay, that last one was pretty bad ass.

Now the only players that are going to show up for the Pro Bowl are people that live in Orlando and dads that want to bring their snot-nosed kids to Disney for the weekend. The NFL is probably going to have to invite player outside of the 53-man roster to play in the game. And the league definitely dropped the ball not having the game in Sydney. Australia would have been awesome because a bunch of crazy NFL players on a vacation and partying with Australians would likely have produced great #content for bombastic smut blogs like this. Oh well.

But you know who the real loser in all this is? Chris Berman. Nobody loved showing off his Hawaiian lingo, shirts, and fun facts more than Boomer. 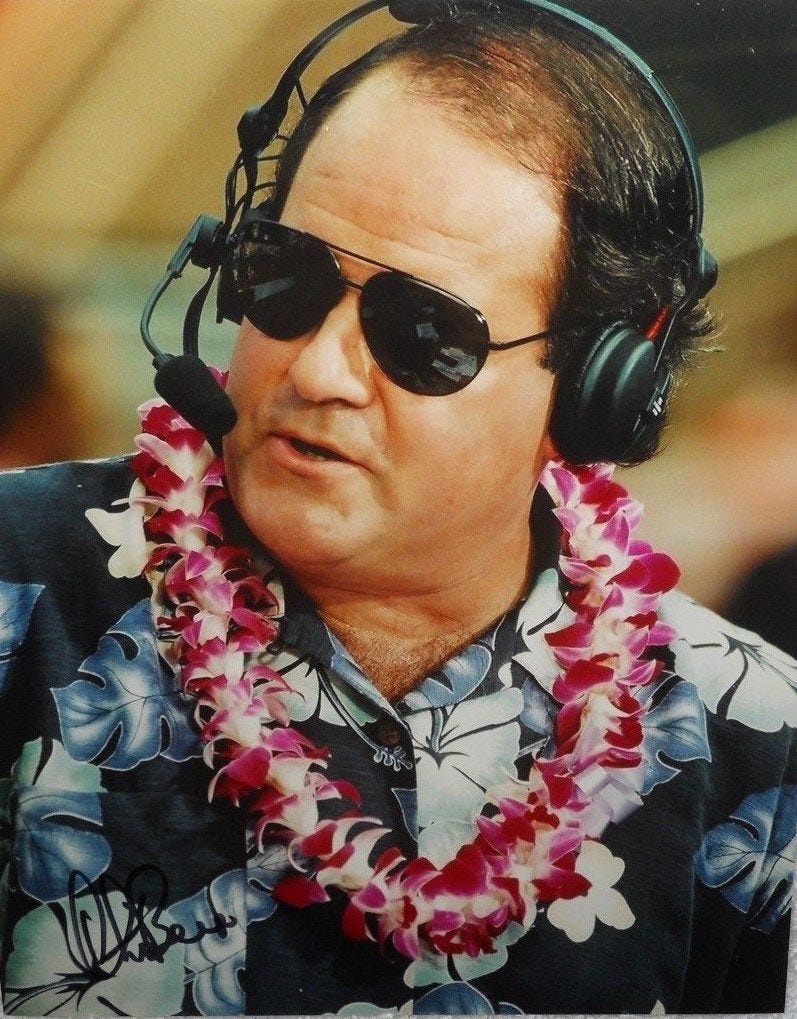 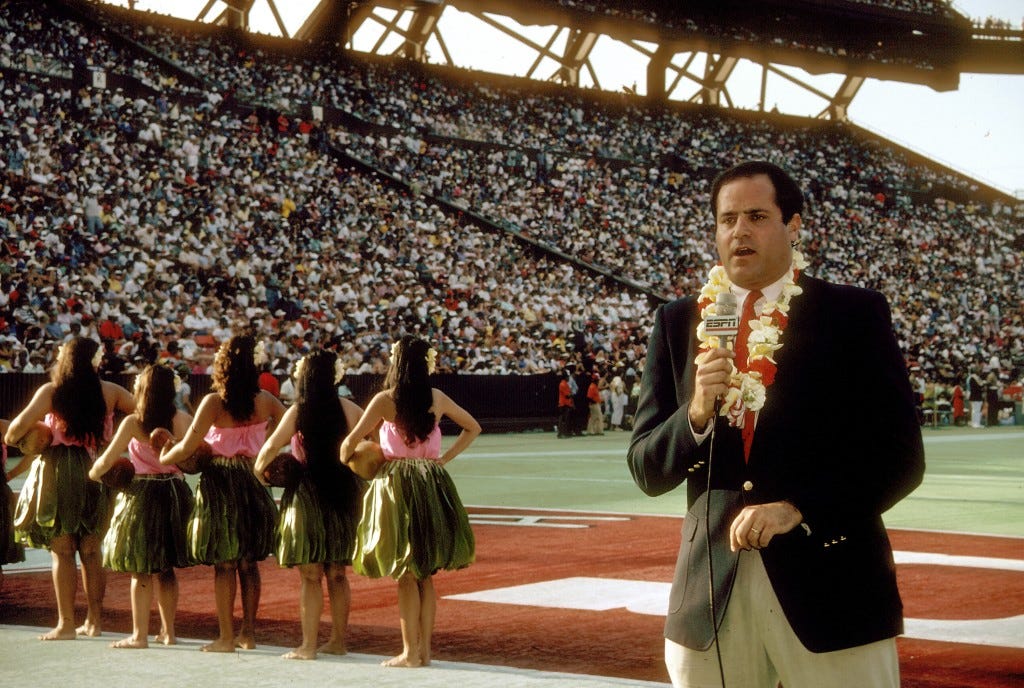 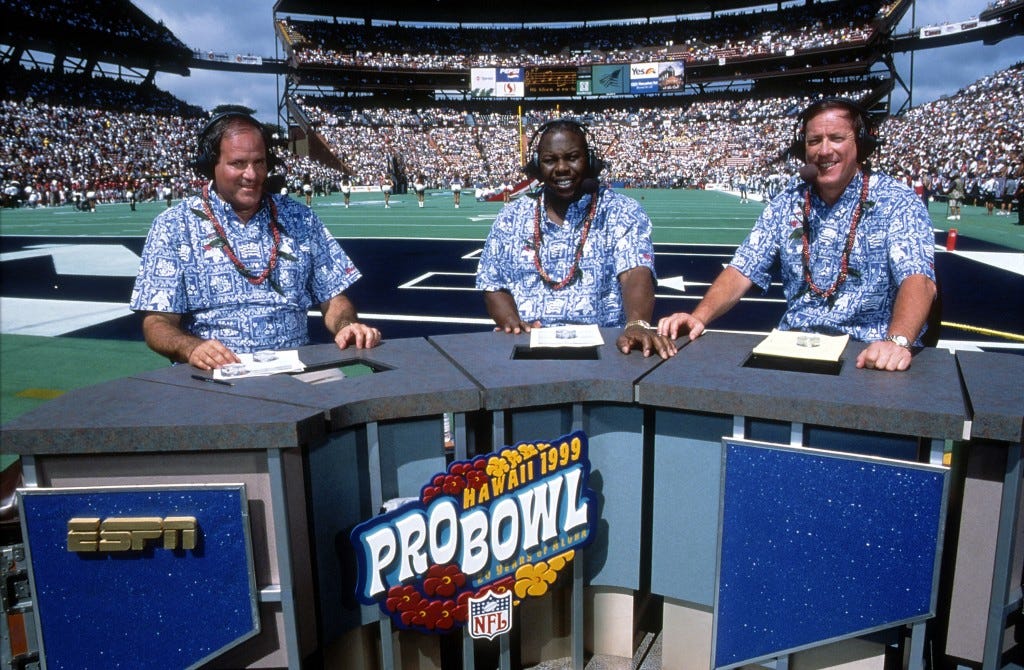 Just a regular Hawai’ian native (I believe that’s how the locals spell it).

However, I guess an ornery Chris Berman will be appointment television. So I guess all isn’t lost for Orlando.