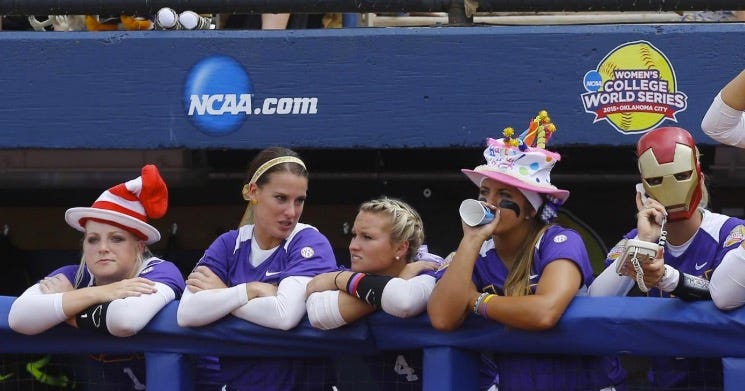 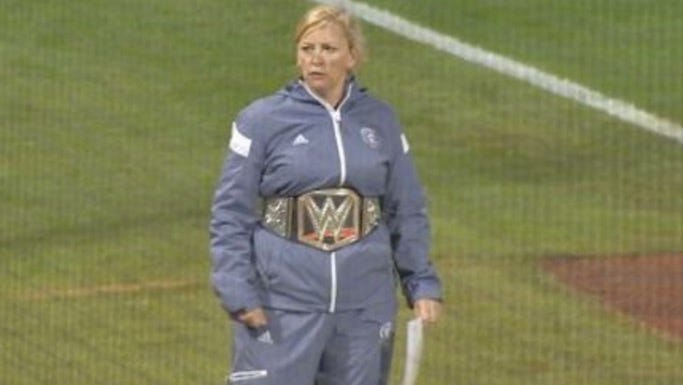 Times Daily – Those fun props North Alabama’s softball team has in the dugout, including masks, beads, hula skirts, etc., are now a thing of the past.

The NCAA banned them after UNA beat West Texas A&M 9-0 in the first round of the Division II Women’s College World Series on Tuesday.

According to an official, the NCAA would release a statement regarding the new rule sometime Wednesday.

“We found out after our game,” Cozart said. “We understand there are rules. It’s one of those things I’ve said many times that it just keeps us loose and excited. It’s fun. These athletes come out here and they stress and put in all this hard work, and all the pressure that is on them. It’s an outlet to relax and be ourselves. That’s what it was all about.”

“It is a little (disappointing) because it’s us,” she said. “It’s our personality, and I love our personality. It’s a big reason we are here. But I understand it’s a policy and they want to do what is right for all the teams.”

Oh my God I love this so much. So so so so much. I mean this is exactly what I’ve been hoping for from the NCAA since the very first day I started blogging about their ridiculous rules and regulations – don’t dip a toe into the water every now and then, just dive all the way the fuck in. Be the villain. Be so over the top that nobody can even believe you truly exist. Don’t ban homeless kids from sleeping on their teammates’ floors and take away kid’s eligibility for playing in a summer church league or penalize programs for giving their star player $5 for gas, then pussy out and reverse course when the internet gets mad at you. Go all in. And what better way to start than targeting women’s softball over the most asinine thing ever?

Terri Holmes, the chair of the NCAA Division II softball committee, told FloSoftball.com that the NCAA is emphasizing an existing rule against such props and behavior, one that is meant to “reflect a positive image of the game.”

Rule 3.12 in the NCAA softball rulebook states: “Coaches are responsible for ensuring that their players are legally equipped and properly attired to reflect a positive image of the game. Uniforms, accessories and equipment (including batting gloves that must be worn, carried in the hands or put out of sight in pockets) must be worn properly and as designed.”

Amazing. Basically the only thing that gets this sport ANY attention is now off limits for…being too fun?

If I was a women’s softball player I would file a Title IX lawsuit so fast it would make Mark Emmert’s fucking stupid head spin.